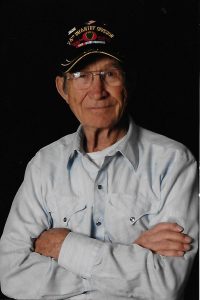 John “Curly” C. Thomas, 94, of Falls City was born on January 12, 1926, to John O. and Mabel B. (Fickle) Thomas in Falls City, Nebraska. He met the lovely Harvina Taft in 1949 and swept her off her feet. The two married on April 24, 1950. They set up home in Falls City just five months before he was deployed for a term of service in the US Army during the Korean War. He was honorably discharged in October 1951. When he returned, John worked maintaining steam engines for the Missouri Pacific Railroad for several years before transitioning to home construction with Frontier Homes. He was employed by the City of Falls City for nine years before he began his final career with the United States Postal Service, from which he retired in 1992. A hard and conscientious worker, John also held part-time positions cleaning and delivering the Penny Press newspaper with his grandson, Dylan.

John enjoyed many hobbies, including collecting coins, antique marbles and baseball cards, and exploring family history and genealogy. A long-time member of the Model A Club of America, John relished restoring original Model A Fords. His three youngest children learned how to drive in his 1929 Model A.

John was a beloved husband, father and grandfather who loved entertaining his grandchildren and great-grandchildren with his lively harmonica playing and singing. He was an avid reader and could often be seen poring over a magazine or newspaper, keeping up-to-date on world events. John passed away peacefully surrounded by his loved ones on Monday, June 8, 2020, at his home in Falls City.

A Celebration of John’s Life will be held at 11:00 a.m. on Saturday, June 20, 2020, at the southeast shelter of Grandview Park, 1001 Wilson Street in Falls City, Nebraska. Full military honors will be conducted at the park by the Nebraska Army Honor Guard. Due to COVID 19, only the immediate family of John will be underneath the shelter for the celebration. All public attendance and other family will be asked to watch the celebration from the park or in their vehicles via the live radio broadcast of FM station 88.7

Inurnment will be at the Steele Cemetery in Falls City at a later date.