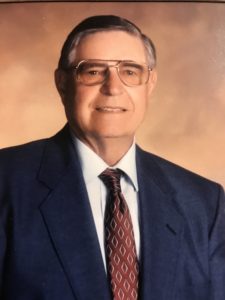 Howard was raised in rural Salem and graduated Salem High School. After his discharge he returned home and worked for the Missouri Pacific Rail Road before he began farming with his father on the family farm. He retired from farming in 1991 and moved into Falls City and has lived here since. He was a member of St. Paul’s Evangelical Lutheran Church at 20th and Towle St. and also served on the District 56 School Board.

Howard is survived by his daughter, Pam Venning of Asburn, VA, son, Scott and his wife Cindy of York, NE, brother, Harold of Falls City, grandchildren:, Chris Venning of Asburn, Nathaniel Auxier at Omaha, Adrienne Auxier at Medford, OR, and two great-granddaughters. He was preceded in death by his parents, wife, daughters, Linda Goetz, Vickie Auxier, a brother, Ralph Auxier, three grandchildren, Eugene Lee Goetz and twins in infancy.

Mr. Auxier has been cremated and a private memorial service will be held at a later date with inurnment to be held at Verdon Cemetery.