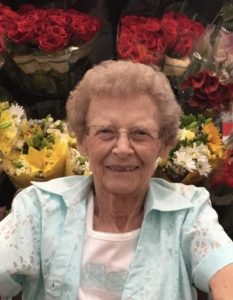 Erma “Jean” (Blecha) James, 88, of Humboldt, Nebraska was born on June 30, 1930, in Pawnee City, Nebraska to Emil and Emma (Horalek) Biggs. Jean’s father died when Jean was six months old, and her mother later married Merritt Biggs. Jean was raised southwest of Humboldt where she attended Dry Branch District #2 country school until 1941 when her family moved to Nebraska City. She attended Nebraska City Junior High until 1943, and then the family moved to El Cerrito, California. Jean finished her schooling in June of 1947, graduating with honors from El Cerrito High School. Jean had begun working in January of 1947 for Attorney Tsar N. Calfee in Richmond, California. She was baptized in the Methodist Church in Richmond, California in July of 1948 and on September 5, 1948, Jean was united in marriage Dale Arthur James in Richmond. The couple resided on a farm near Humboldt, Nebraska and lived there until moving to Wahoo, Nebraska in August of 1958 where Jean worked for HK Ferguson Company and Mead Missle Base in Mead, Nebraska. The family moved to Loveland, Colorado in February of 1963. While living in Loveland, Jean worked for Attorney Ernest G. Hartwell of Hartwell, Starkey & De Good from March of 1963 to August of 1968 when Dale and Jean moved back to Humboldt and lived on the James Family Farm the rest of their lives. Jean worked for the law office of Kotouc, Kotouc, Fankhauser & Maschman and also worked for Home State Bank & Trust Company and American National Bank from September of 1974 until June of 1995 when she retired.
Jean was a past member of Pythian Sisters, past member of Rebekah’s Lodge and current member of the Humboldt Christian Church. She always enjoyed working and used shorthand and typing skills throughout her life. Jean’s favorite pastimes were cooking, sewing, crocheting, reading, watching tv, and shopping! She instilled in all the girls to “shop til you drop,” which was a favorite motto of them all. Jean enjoyed Polka music and dancing to her favorite Czech group, Bob Blecha and The Bouncin Czechs. Most of all, Jean loved her family. She loved family-related projects and took great pride in her children, their spouses, her grandchildren, and all their interests.

A Celebration of Life will be held at 10:30 a.m. on Friday, June 14, 2019, at The Christian Church in Humboldt, Nebraska with Pastor Howard Blecha officiating.

Private Family Inurnment will be at the Humboldt Cemetery.

In lieu of flowers, memorial contributions may be given to the family’s choice with a later designation.