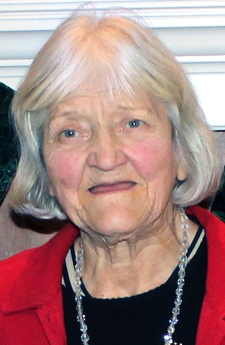 Pauline Marie Magdalena Braun, 91, of Nampa, ID, passed away on June 2, 2017, in Nampa. She was born March 31, 1926 in Falls City, the seventh of the eight children born to John and Elizabeth Braun. Pauline’s father delivered her at home in the middle of a snowstorm, and when the snow had melted enough that the family could get to church, she was baptized at St. Paul’s Lutheran Church on May 2, 1926.

Pauline began her love for Lutheran education at St. Paul’s, and attended school there through the eighth grade. She went on to high school and later graduated from St. Mary’s Hospital in Rochester, MN, with a nursing degree in 1947, where she was an active member of the Cadet Nursing Core. Pauline worked at Kaiser Aluminum in Spokane, WA, as an industrial nurse for most of her professional career and also taught physical education at an elementary school in Spokane before returning to Nampa to retire.

Pauline was an active member of Zion Lutheran Church, and loved to sing in the choir and supported many Lutheran colleges and seminaries. She helped to sponsor the education of many students in Lutheran schools locally and across the country.

She was preceded in death by brothers, Louis, Walter, Herbert, Herman and Martin Braun; and sister, Mildred Kamprath.

She is survived by her younger sister, Helen Terry, of Farmington, NM; numerous nieces, nephews, many dear friends and neighbors.

In lieu of flowers, donations may be made in Pauline’s name to the scholarship fund at Zion Lutheran School.

Well done thy good and faithful servant; you will be forever in our hearts (Matthew 25:21).

The family would like to specifically recognize and thank Journeys Hospice and the staff at Park Place Assisted Living, whose love and care for Pauline has been exceptional.