A memorial service will be held at 11 a.m. Saturday, May 27, 2017 at the First United Methodist Church of Falls City, with Rev. John Hogue and Rev. Paul Weinert officiating. The family will receive friends from 7-8 p.m. Friday, May 26, at Dorr & Clark Funeral Home, Falls City.

Gale spent much of his childhood on the family farm near Pickrell, in Gage County. In his early teens, he went to work for several farm families in the surrounding area, while he attended and then graduated from Barnston High School in 1947.

He began farming in Richardson County in 1949, when his father inherited 160 acres southeast of Salem on the Nemaha bottoms. He also farmed with his uncle, Ralph Marsh, in Whiting, IA.

Gale joined the U.S. Navy in 1952. After being honorably discharged from the service in 1954, he returned to farming in Richardson County, where he met and married Jeanne Scheer of White Cloud, KS, in 1961. Together they had two daughters, Sarah and Carla. During the early 1960’s, he attended University of Nebraska at Lincoln and continued farming on the weekends. After graduation he devoted himself to his passion of farming. Gale was a pioneer in Richardson County in the practice of gated-pipe irrigation beginning in 1956. He also served as the Richardson County Weed Control Commissioner.

In 1968, he and his family began their annual trips between Falls City, Nebraska and Lake Havasu City, AZ. Innovative in business, he established the first boat storage facility in Lake Havasu City. Over the years, he expanded the business with self-storage units constructed from pre-engineered agricultural buildings. Every year after the fall harvest, he traveled to Lake Havasu City to continue building and operating the business. When planting season arrived, he would return to Nebraska to farm throughout the season. 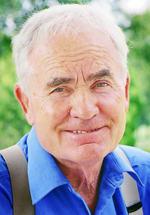 In his retirement, he fell in love and married Mildred Appleoff in 2003.

Over the years he joined the efforts of a number of civic organizations in Falls City and Lake Havasu City, including Rotary Club, Blue Valley Mental Health Board, SCORE, Havasu Community Choir, Lake Havasu Concert Association and others. He was also a charter member of the Clefsmen, a male glee club organized in 1966. He loved dancing, as well, and won several dance contests. He was long-time member of the First United Methodist Church of Falls City and St. Michael Methodist Church in Lake Havasu City, and a choir member in both congregations.

Gale was preceded in death by his parents; and sisters, Joan Seibel and Betty Bower.