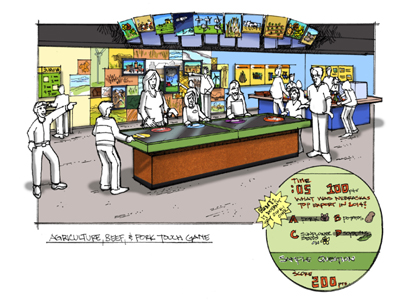 First Lady Susanne Shore today announced preliminary exhibit and tour details of the Nebraska150 Celebration’s largest project, “Truckin’ Through Nebraska: A Mobile Children’s Museum,” and Falls City is among the 42 tour stops planned, though the exact date(s) and times of operation have yet to be determined.
First Lady Susanne Shore said, “We created the Mobile Children’s Museum to provide a fun, hands-on learning experience for children who may not normally be able to easily access a children’s museum,” the First Lady said. Through play, interactivity and the latest technology, Nebraska’s children will explore their heritage and envision their futures. We hope the experience will help power the imagination and create an excitement about learning.”
The Mobile Children’s Museum is contained in a 53-foot state-of-the-art custom air-ride, double-expandable trailer that is specially designed and outfitted for traveling museum exhibits. The unit is climate controlled, has GPS tracking, Wi-Fi, its own generator and is ADA accessible.
Interior exhibits will include areas where kids will build shelters and test them in a wind chamber or earthquake simulator, design their own 10-acre homestead, test their knowledge of Nebraska, create their own movie, explore toys from the past, craft their own postcards and more.
Exhibits will also surround the exterior of the trailer, allowing for optimal play and learning space. Those exhibits will include a timed “chore” challenge obstacle course, foam block invention area, toy creation station and more.
The Mobile Children’s Museum will launch in early April from the Omaha Children’s Museum, which partnered with the Nebraska150 Celebration on the project.
“We could not have accomplished this enormous undertaking without the support and guidance of the Omaha Children’s Museum,” Shore added. We are incredibly grateful for their partnership and the expertise they brought to the project.”
Omaha Children’s Museum Executive Director Lindy Hoyer said, “We serve the metropolitan area well, and we saw this mobile museum as a great opportunity to stretch our mission across the state. We wanted to work with the Nebraska150 Celebration to help create the mobile museum because it was a great opportunity to engage young children and their families in these communities. I grew up in a small town in Nebraska, and I know how something like this can energize an entire community.”
In addition to Falls City, the tour will include Beatrice and Nebraska City in southeast Nebraska.
While exhibits in the Mobile Children’s Museum are intended for children ages 5-12, audiences of all ages are welcome. Admittance is free and open to the public.
The Mobile Children’s Museum is sponsored in part by Children’s Hospital and First National Bank.
More information about the Nebraska150 Celebration is available at www.ne150.org on Facebook at facebook.com/nebraska150 and Twitter @ne150.
ABOUT THE NEBRASKA150 CELEBRATION
Planning for the Nebraska150 Celebration began in 2012 when a group of active citizens from across the state formed the Friends of the Nebraska150 Foundation.  In 2014, the Nebraska Sesquicentennial Commission was established by the Legislature and 17 members from across the state were appointed by the Governor to lead the initiative. In 2015, the Celebrating Nebraska Statehood Foundation was established to help coordinate efforts and direct everyone toward collective success.