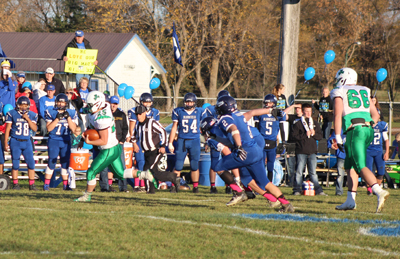 Story By Brian McKim
The Sacred Heart Irish wasted very little time getting on the board Tuesday afternoon against the Bloomfield Bees.  On just the third offensive play of the game Austin Ahern carried the ball in from 13 yards out for a touchdown with 10:55 to go in the first quarter.  The Irish offense wasn’t the only thing clicking in the first half. The defense really stepped up and only allowed one first down and just 34 yards of total offense in the opening half.  “The team is playing well.  They prepared well. They knew the game plan,” Goltz said, when asked about SH’s quick start.
After a three and out to start their first defensive series, Theo Rohrer blocked the Bees punt and the Irish would take over with a short field on the Bloomfield 22 yard line.  This drive lasted only two plays as Christian Harring would carry the ball 23 yards for the second Irish score of the game.  The conversion run by Harring was good and with 8:21 still to play in the first quarter the Irish led the fifth-seeded Bees 14-0.
Less than a minute later the Irish would yet again get into the end zone, this time Sean Arnold capped off a five play 40 yard drive with a 10 yard touchdown scamper. The PAT pass failed but the Irish had a commanding 20-0 lead to close out the first quarter.
On the following Bloomfield drive SH forced their third three and out of the game and after a short punt the Irish took over on their own 36-yard-line. Sacred Heart only needed two plays to hit pay dirt this drive. Sean Arnold took the ball and rambled 54 yards for a Irish touchdown run. The PAT run by Drew Bippes was good and with less than three minutes into the second quarter the Irish led 28-0.
On the other side of the ball, the Bees couldn’t get anything going as the Irish continued to play stellar defense.
“Both Osceola and Bloomfield were both one-dimensional teams, so stopping the run was the main focus. The other team hasn’t completed a pass on us in two games.  They haven’t thrown many either.”
After another three and out SH put the ball in the hands of Harring, who quickly put SH on the board again with a 39-yard TD run to put the Irish up 34-0 with 7:45 to play in the half. The next drive for the Bees again produced a three and out by the Irish defense, aided by a nine-yard sack by Michael Keithley.
The ensuing set of downs took the Irish a little longer to punch it in. SH slowly moved the ball 39 yards in 10 plays, finished off with an eight-yard TD pass from Bippes to Ahern to make the score 40-0 heading into halftime.
Bloomfield began the second half with a long scoring drive to cut the margin to 40-6, however it took the Bees 14 plays to go the 45 yards against the Irish and ate up a lot of the clock.
The Bees coaching staff said before the game it would be happy with three yards a play, but probably not with their team trailing by 40 at halftime. On the  next SH possession the Irish were forced to punt for the first time of the game.
This time, the Bees moved the ball down the field for 57 yards in six plays and got on the board when Quinten Moles ran it in from the two. With :33 to play in the third quarter the Irish led 40-12.
Sacred Heart wasted little time in bouncing back, going 47 yards in just five plays with Ahern finishing off the scoring for the Irish with a five yard TD run. The conversion run failed, but with 10:22 to play in the ball game the Irish led the Bees from Bloomfield 46-12. Neither team was able to produce much more offense the rest of the game, as the two teams traded possessions until the clock expired ended the Bees season.
The Irish ended the game with 350 yards rushing while giving up just 143 yards to the Bees.
“Our blocking has been solid.  Our backs are talented. We take what they give us. Bloomfield wasn’t taking the dive on our option so we fed the ball to Austin,” said Goltz.
Ahern led the ground attack with 163 yards and two touchdowns on just 11 touches. Ahern, Harring, Michael Keithley and Brandon Scheitel led the Irish defensive attack.