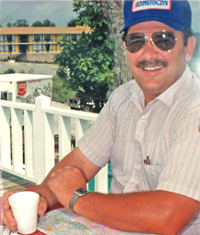 John R. Rosenberger, 71, passed away on Aug. 23, 2016 at Falls City. John was born in Sioux City, IA, but lived most of his life in Papillion, NE.
In his early years he was an avid amateur photographer and Real Estate agent for N.P. Dodge. In his later years, along with his family, he simultaneously owned and operated 1 Potato 2 Potato, restaurants in Westroads and Oakview Malls, and Gold Coast Lounge in Omaha. While living in Las Vegas, he retired from Greyhound Lines after 27 years.
After moving to Falls City, he became a friend to creatures great and small (his birds) and was particular to Baby and Alley, (his cats). After retirement, he began his long and hardest journey, fighting the disease that finally took his life.
He is survived in this life by his wife of 42 years, Holly. Their children John S., Jessica J., Luke J., and John C.
He was preceded in death by his daughter Jackie Ann; his mother Florence and father Francis.
Viewing will be at Waterbury Funeral Home, 4125 Orleans Ave. Sioux City, IA. 4 p.m. to 7 p.m. Friday, Aug. 26.
A Graveside service will be held at Calvary Cemetery, 2802 Casselman St., 10:00 am. Saturday, Aug.27. Please join the family for a luncheon at Golden Corral, 5230 Sergeant Rd. following the service.