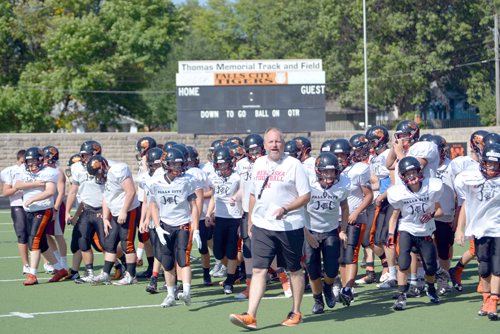 By Brian McKim
Coach Darin Fritz and the Falls City Tigers begin their season on Friday, Aug. 26, and look to improve upon their 7-3 record of 2015.  The Tigers will begin the season on the road against the Southern Raiders, a team that finished last season with five wins against four losses.
The Tigers will be tested early this season as they play host to Ashland-Greenwood the second game of the season.  Ashland-Greenwood, who beat the Tigers 41-14 last season, is rated fifth in the preseason poll by the Omaha World Herald. Fairbuy and Auburn could also prove to be tough opponents on the schedule this season.
Coach Fritz will return six starters on the offensive side of the ball and 8 starters on defense.  On offense the Tigers will be led by 175 pound senior running back Zane Heckenlively. Also look for Rudy Vrtiska, the spinback in Coach Fritzs’ Single Wing offense, to get a lot of touches this season.
Heckenlively averaged an astounding 8.7 yards each time he touched the ball in 2015 for a total of 1,501 yards on the season.  The offensive line in charge of opening the holes for Heckenlively will be led by 275 pound Sr. Ben Bauman.  Dalton Kennel and Rudy Vrtiska will be looked upon to anchor the 4-2-5 defense this year.
If all goes well this season the Falls City Tigers look to make the playoffs for the sixth time since the 2009.