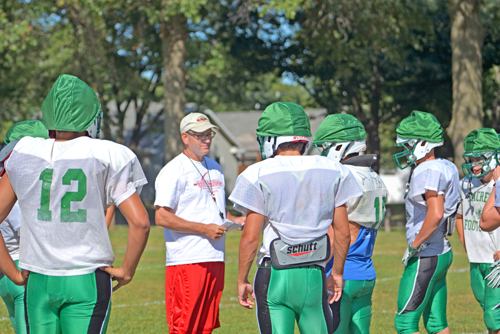 By Brian McKim
The Falls City Sacred Heart Irish football team finished the 2015 campaign with a 9-2 record; great by most standards but not quite good enough for Coach Doug Goltz and the Irish.
As Coach Goltz enters his 30th season at the helm, the Irish have compiled 276 wins against 48 losses including seven State Titles. The Irish have made making the playoffs a habit with 32 appearances which is third best all time in the state.
When asked about what has changed in his 30 years Coach Goltz replied with a smile, “I probably yell less than I did when you played.”
Sacred Heart opens the season this Friday, August 26, at home against Nebraska City Lourdes Central Catholic. The Knights began last season, ripping off seven straight wins before losing their final two games of the season.  The Irish will be without Bryant Jorn who suffered an ankle injury and will be out of action for 3-4 weeks.
The Irish will return five starters on offense, and six starters on the defensive side of the ball. 6-5’, 290 lb . Senior Bryant Jorn, along with 6-2’, 240 lb . Junior, Theo Rhorer will help anchor both the offensive and defensive line for the Irish.
On offense, look for FB Austin Ahern, RB Christian Harring and RB Sean Arnold to get the majority of the touches.
The Irish, looking to get back to the State Championship game for the first time since 2013, will need to avoid the injury bug and hope for a little extra “luck of the Irish.”