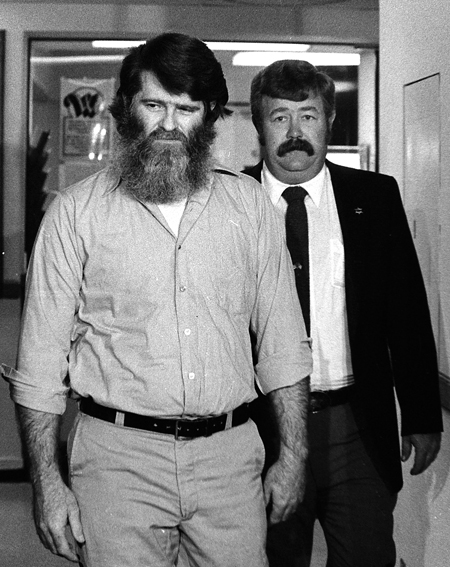 Nearly three full decades after being sentenced to die for the heinous crimes he committed near Rulo, two-time convicted murderer and death-row inmate Michael Ryan died of cancer at approximately 7:45 p.m. Sunday in the Tecumseh State Correctional Institute. Ryan, 66, had been imprisoned at Tecumseh since 2001 when he was moved from the Nebraska State Penitentiary in Lincoln. His attorneys appealed the death sentence at every corner the past 30 years or so and, ultimately, were successful. Ryan was convicted and sentenced to death on Sept. 12, 1985. He was found guilty for the second-degree murder of five-year-old Luke Stice and the torture/murder of 26-year-old James Thimm. A high school dropout, Ryan, born Aug. 3, 1948, was the leader of a small, anti-government group that occupied a farmhouse near Rulo. In mid 1984, Ryan and several other people moved into the farm owned by Rick Stice. The group was united in their common interest in the teachings of Rev. James Wickstrom. Group members referred to God as “Yahweh.” Every detail of every activity was first determined by consulting “Yahweh” through the “arm test.” To perform the test, one member would hold their right arm out; a second member would place one hand on the shoulder and one on the wrist of the first member, exerting downward pressure on the arm. The second member would then question “Yahweh.” If “Yahweh’s” answer was yes, the arm stayed up; if the answer was no, the arm would fall. Ryan’s teachings included the supremacy of the white race, anti-Semitism and a distrust of government. At one time over 20 people inhabited the various buildings around the Rulo homestead; a large percentage of them were children. Ryan urged his group to stock pile weapons and vitamins in preparation for the Armageddon that he said was to take place in Nebraska. Under the cover of night, Ryan and his followers would often travel to Kansas and Missouri to steal items for resale. Ryan became agitated follower with James Thimm, and relegated him to a lesser status in the group. Ryan then began to abuse Thimm intensively, until he finally ended up killing him. Ryan also became increasingly abusive with five-year-old Luke Stice, eventually killing him as well. Both victims were buried in shallow, unmarked graves on the property. One June 25, 1985, group members Andreas and James Havekamp were arrested for stealing farm equipment. On August 17 and 18, police converged on the farm, finding illegal weapons and stolen property. The members of the group were arrested. Months later an FBI informant alerted the police to the murders. The bodies were exhumed and Ryan was arrested. Ryan’s attorneys used the insanity defense during the trial, and five psychologists and psychiatrists testified that he was mentally ill. But Dr. Emmett Kenny of Omaha testified that sadistic tendencies, not mental illness, drove Ryan to torture and kill. Michael Ryan was subsequently charged with two counts of first-degree murder for the killings of Luke Stice and Thimm. Dennis Ryan was charged with first-degree murder for the killing of Thimm. Timothy Haverkamp pled guilty to second-degree murder before Michael Ryan’s trial and testified for the State in that trial. Andreas and James Haverkamp pled guilty to lesser charges before Ryan’s trial and also testified for the State. Ryan was convicted of Thimm’s first-degree murder at a jury trial and was subsequently sentenced to death. After Ryan was found guilty, but before he was sentenced, he pled no contest to a reduced charge of second-degree murder for the killing of Luke Stice and was sentenced to life imprisonment on that charge. Other members involved in the cult were Ryan’s son Dennis, who was 15 at the time, was convicted of second-degree murder and sentenced to life in prison. The conviction was later overturned and he pleaded guilty to manslaughter and first-degree assault. He was released from prison on April 15, 1997. Timothy Haverkamp pleaded guilty to second-degree murder and served almost 24 years of a 10-to-life sentence before he was paroled on June 24, 2009. John David Andreas and James Haverkamp both plead guilty to charges of possessing a concealed weapon, received stolen property and second-degree assault. Both were sentenced to 26 years each in prison. They were released on November 20, 1998. Ryan was last scheduled to be put to death on March 6, 2012, but the state Supreme Court halted his execution. A shortage of sodium thiopental effectively put all death sentences on hold. In January, the U.S. Supreme Court refused to hear Ryan’s latest appeal, nine months after the Nebraska Supreme Court did the same. The sister of victim James Thimm, Miriam Thimm Kelle, told state lawmakers that Ryan had a medical condition that would kill him soon. She was testifying in favor of abolishing the death penalty. During the same hearing, Sen. Ernie Chambers said that Ryan had terminal brain cancer. Tecumseh spokeswoman Jessica Houseman said of Ryan Monday, “He had a long-term medical condition.” There was no sign of trauma but an autopsy will be performed. As is required by state law, a grand jury will investigate the death since it happened while Ryan was in custody.