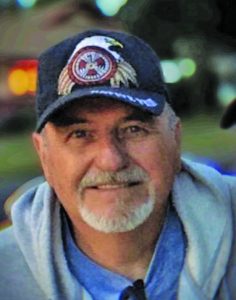 Marvin Robert “Sonny” Campbell. I was born June 18, 1942, at home in Rulo, Nebraska and I passed away on Wednesday, January 4, 2023, at Bryan LGH Medical Center East in Lincoln, Nebraska.  I was the first of six children born to Marvin Jesse and Mildred (Dannecker) Campbell and was raised on the Iowa Reservation until early teens when we moved to Reserve, Kansas.  I graduated from Reserve High School in 1961.

I worked most of my life as a carpenter at various jobs and retired as a Union Carpenter in 2001 because of my health.  I enjoyed fishing, wood carving, Pow Wows and Baby Aspirin Whips.

I am survived by my wife Pat of the home, sons: Jeff Campbell and his significant other Melissa and Gene Campbell both of Falls City, step-sons: Todd (Peggy) Miles and Billy (Michelle) Grame both of Topeka, KS; brothers: Doug (Erin) Campbell and of Forsyth, Missouri and John Campbell of Hiawatha, Kansas, sisters: Linda Vogele of Falls City and Debbie (Chad) Gray of Springfield, Missouri, grandchildren: Tony, Christin Campbell, Danielle (Dale) Campbell, Hailey (Chris) Winters, Mitchell and significant other Megan, Chelsae and fiancé Nik and Shane and significant other Aly. I have seven great-grandchildren: Rylee, Draven, Bentley, Aubrey, Avery Jo, Quintin and Alexis Campbell, two step-grandchildren: Octavia Grame and Chase Hamm and many nieces, nephews, and cousins. I am preceded in death by my parents, my sister Barbara Crabtree and my daughter Karey in 1981.

My inurnment will be at the Immaculate Conception Catholic Cemetery in Rulo, Nebraska at a later date.