Bradley “Brad” Lee Glathar, 62, of rural Humboldt, Nebraska was born July 15, 1960 in Pawnee City, Nebraska to Loren and Lenora (Olson) Glathar. Brad was the oldest of three children. He was raised on the family farm 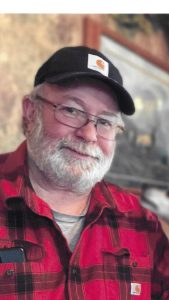 northeast of Humboldt. He attended Bratton Union until transferring to Southeast Consolidated School where he graduated with the class of 1978.  Brad worked for many years in Auburn as a machinist until retiring.  He farmed from the time he graduated from high school where he raised sheep, cattle, chickens, and several more animals on his farm until his passing.

Brad was married in 1979 and from that union 3 daughters were born. He surrounded himself with animals throughout his life and spent his adult life instilling a love of creatures big and small to anyone he came in contact with. If he wasn’t caring for his own animals, you could find him helping someone with theirs. Brad was a caretaker and protector, especially of those he was close to. He genuinely cared about helping others and was a mentor to many of his younger friends.

In his early years he spent a great deal of his time hunting, mostly coon and coyote hunting. On most weekends in the winter months, you could find Brad in his truck with a dog box full of either greyhounds or hounds driving around the country with a crew of his hunting buddies. Then at night, after finishing chores at the farm, he would load up 3-4 of his hounds and head to the timber to round out the day coon hunting.

Brad had many other joys in his life as well. Including his family, stories of growing up, spending time with his closest friends, country music, watching westerns (especially those with John Wayne), playing cards, and Husker football.

Brad passed away suddenly on Monday, January 2, 2023 at the Midlands Hospital in Papillion, Nebraska having reached the earthly age of sixty-two years, five months, and eighteen days. He was preceded in death by both grandparents, brother Scott Glathar, and nephew Austin Glathar.

Funeral Services will be held at 10:30 a.m. on Tuesday, January 10, 2023, at the Christian Church in Humboldt, Nebraska with Pastor Howard Blecha officiating. Interment will immediately follow services at the Humboldt (South) Cemetery.

Memorial contributions are suggested to the family’s choice with a later designation.