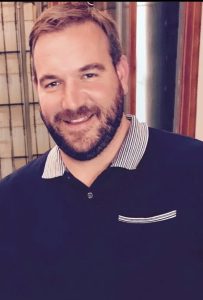 Steve Stalder Kullberg was born in Overland Park, Kansas, on February 19, 1979, to James and Mary Beth (Stalder) Kullberg. He was the younger brother of Jim and Pat, whom he looked up to and loved dearly.

A 1997 graduate of Shawnee Mission South High School, Steve went on to the University of Kansas, where he was a proud member of Phi Kappa Psi Fraternity and earned a bachelor’s degree in communications in 2001.

It was at KU that he met Stacey Halterman, whom he married in 2002. Together they share three children, Finley Mae, Beckett James and Quinn Dougherty. Steve enjoyed teaching them a “word of the day” and regularly encouraged them to join him on his many runs. He was extremely proud of them and loved them beyond words.

Steve also adored his extended family, including his nieces and nephews, and was a regular spectator at their sporting events.

Steve was an avid sports lover from every angle. As a young boy he was involved in a variety of sports including baseball, soccer and running track. Steve was a multi-sport athlete (and member of the Homecoming Court) in high school, winning the Sunflower League baseball championship his senior year and playing in an All-Star football game. He continued his successful career in football at the University of Kansas, where he walked onto the team, ultimately earning a scholarship and becoming a three-year letterman. Steve was a big supporter of Nebraska football and all Kansas City major sports teams. By far his favorite though was watching his children play sports and serving as one of Beckett’s football coaches.

Steve’s knack for cultivating relationships led to a successful career in sales.

He cherished his friends and was fortunate to have so many of them from all different phases of life. Once you were a friend of Steve’s you were his friend forever.

Steve’s personality was larger than life and he never met a stranger. His gentle, teddy bear persona made people feel special and he was so much fun to be around. He was passionate about history and music and his signature “Kull-zy” dance move was a crowd favorite. His belly laugh was uniquely him and was heard often.

Steve was loved immensely by so many and will be missed tremendously.

He was preceded in death by his father, Jim. Survivors include his children, Finley, Beckett and Quinn; ex-wife, Stacey; mother, Mary Beth (Stalder); brothers, Jim (Wendy) and Pat (Jennifer); nieces and nephews, Jarod, Ashlyn, Robert, Lauren and Sam; and other family members and countless friends.

A celebration of life service was held for Steve on Wednesday, May 25 at the Colonial Presbyterian Church, 12501 W. 137th Street, Overland Park, Kansas. Visitation was at 10:00 a.m. with memorial services following at 11:30 a.m.

In lieu of flowers, we welcome your support of Steve’s children, Finley, Beckett and Quinn, by donating to the “Kullberg Kids Fund” on Go Fund Me https://gofund.me/b62c18a8.