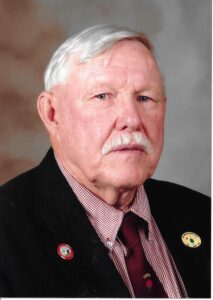 James “Jim” Moore Standerford, 92, of Humboldt, Nebraska was born on March 2, 1929, in rural Humboldt, Nebraska to Joy and Millie (Moore) Standerford.  He raised on the family farm north of Humboldt where Jim attended Pine Ridge country school.  Jim then attended Humboldt High School and graduated with the class of 1946.  On April 9, 1950, Jim was united in marriage to Jeanne Powell at the First Presbyterian Church in Humboldt, Nebraska.  The couple resided west of Humboldt after their marriage where they established JMS Dairy, until moving into Humboldt in 2006.

Jim became active in the Humboldt community at a young age and continued to serve in many different capacities until his passing.  He began his great love of fairs as a sophomore in high school when as a member of FFA, Jim became involved with the Richardson County Fall Festival in September of 1943 on the clean-up crew.  He became a member of the Richardson County Ag Society in 1961, serving as president from 1968 until his passing.  He was so pleased to serve on the former State Fair Board for several years and was honored for all his dedication as the 2000 Nebraska Association Fair Managers Person of the Year.  In 1990 he was the Richardson County Fall Festival King.  Jim joined the Humboldt Odd Fellows Lodge #34 on March 15, 1949 and has served their organization at many different levels, also becoming a member of the Rebekah Lodge in 1962.  He joined the Grand Encampment of Odd Fellows in October of 1999, served as the Nebraska State Grand Master in 2000 and served as Odd Fellows Grand Secretary from 2007-2019.  Jim was elected as Richardson County Commissioner and served the 3rd District from 2012-2016.  He became a member of the First Presbyterian Church in Humboldt in 1950 and has served his church as an Elder and treasurer. During his life Jim has also served as a member of the Richardson County Extension Board and on the Board of Mid-America Dairymen.  After moving to town, he joined Rotary International and also served on the board of Colonial Acres, even after becoming a resident.

Jim went to be with his Lord on Tuesday, April 6, 2021, at Bryan LGH Medical Center East in Lincoln, Nebraska having reached the earthly age of ninety-two years, one months and four days.  He is preceded in death by his parents, wife, Jeanne and a grandson; brother, Dee Standerford and brother-in-law, Don O. Fankhauser.

A Celebration of Life Service will be held at 10:00 a.m. on Saturday, April 17, 2021 at the First Presbyterian Church in Humboldt, Nebraska with Rev. Don L. Fankhauser and Pastor Rick Martin officiating.

Inurnment will be in the Humboldt Cemetery.