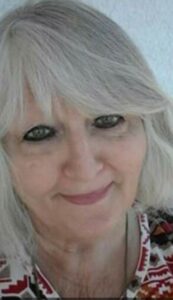 Twila Marlene Hochstein, 77, of Falls City, Nebraska, was born on September 22, 1943, in Shubert, Nebraska, to Norman E. and Bonna J. (Marchand) Alexander. She spent most of her childhood with her family in Shubert, but her family moved around a bit and Twila spent some of her school years in central Iowa.  The family eventually moved back to southeast Nebraska, where Twila graduated from Shubert High School with the class of 1962.

Twila passed away on Thursday, November 5, 2020, at Bryan LGH Medical Center West in Lincoln, Nebraska, having reached the earthly age of seventy-seven years, one month and fourteen days.

She was preceded in death by her parents, a sister Joyce Macklin, a brother Wayne Alexander, soulmate David Hochstein and a nephew Timothy Macklin.

A Celebration of Life is open to the public. It will be held at 1:00 p.m. on Saturday, November 14, 2020, at the Hall Funeral Chapel, 707 15th Street in Auburn, Nebraska, with Pastor Ben Moore officiating.

Inurnment will be at the Nemaha Cemetery following services.