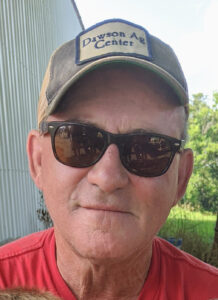 He married Lisa Rokey in December of 1979 at Sabetha and they were later divorced. He then married Sandy Appleoff at St. Mary’s Catholic Church at Dawson in 2015.

Tim was raised in Dawson and graduated from Dawson-Verdon High School in 1974. He then attended Peru State College and then Kearney State College and in 1976, he began working for Burlington Northern Railroad; he was a roadmaster supervisor and retired in October of 2015. He then worked helping farmers, tree shearing and other jobs to stay busy. He was a member of St. Mary’s Catholic Church at Dawson and the ATA Trap Shooting, NRA and Falls City Elks Lodge.

A Parish Rosary will be recited on Wednesday at 7:00 PM at St. Mary’s Catholic Church. The family will receive friends following the rosary at St. Mary’s Fellowship Hall.