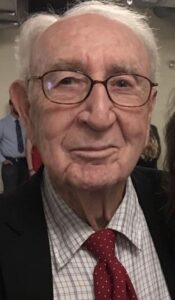 After spending most of his young life on a farm, Darrell graduated high school in 1950 in Falls City, NE. He attended Peru State College before enlisting in the US Army during the Korean War. His favorite Army story was bragging about only getting seasick once on the 12-day boat ride across the Atlantic Ocean; it just lasted 12 days!

In 1956, he married the love of his life, Wilma Ilene Brook of Hiawatha, KS. They saw their first son born in Falls City, NE before moving to Topeka, KS, and having another son and daughter.

After a short stay in Sedalia, MO, in 1967, they moved to their forever house in Overland Park, KS, on the eve of their fourth child being born. They enjoyed a 61-year marriage before Wilma’s passing in 2016.

Darrell graduated from Kansas University in 1962 with a Bachelor’s degree in Civil Engineering. He spent the bulk of his career as a salesman for a steel metal building company. If you travel along the highways of Kansas, Oklahoma, Nebraska and Missouri, you are likely to see some of his buildings still standing to this day. In 1982, Darrell created Fischer Construction Consultants, where he helped design several church expansions, revisions to the Liberty Memorial, and updates to the downtown Lawrence Airport. He kept very busy until retiring in 2017. He was also a member of the American Legion Post 370 of Overland Park, KS.

During his life, Darrell had many hobbies, including hunting for wild mushrooms each spring and pecan picking in the fall. He enjoyed playing cards and golf, but he always had a passion for numbers and statistics. He kept score at all of his children and grandchildren’s sporting events, but he didn’t stop there – he kept season-long statistics on every player on the team and handed out stats sheets after each week’s games. This selfless act gave him the beloved moniker, “STATs Man.” His passion for numbers extended to investing in the Stock Market, often charting his stocks daily on his infamous clipboard.

He was an avid Kansas City Chiefs, Kansas City Royals and Kansas Jayhawk fan. He had season tickets at one point for all three, but he relished going to the Chiefs games with his family for 32 years.

It has been said that you judge a man’s character by how they handle the bad times, and this was possibly Darrell’s greatest strength – surviving two major cancer scares, Parkinson’s Disease, and a stroke yet never letting his misfortunes squash his zest for life.

Darrell had the uncanny ability to evaluate the situation around him and use his quick wit to come up with a funny comment, story, or joke. He thoroughly enjoyed making people laugh. His smile and love of laughter stayed with him until the very end.

A Celebration of Life Service is planned for August 8, 2020, and can be view live on-line at 2 pm, August 8, 2020, through our website at www.johnsoncountychapel.com in lieu of flowers, please consider donating to any Hospice affiliate or the Parkinson’s Foundation in his honor.