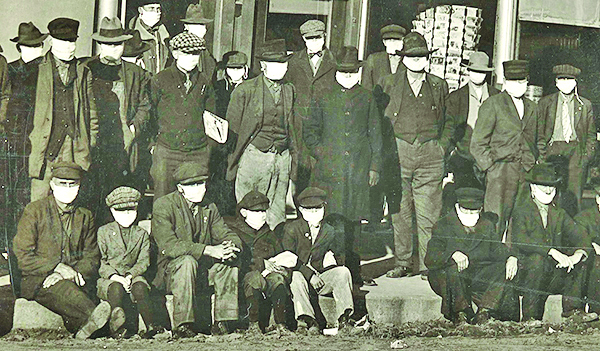 This article is the second in a series about the 1918 “flu” epidemic that killed millions worldwide. This second article looks at the arrival of the “flu,” to Falls City and Richardson County.

Falls City was already in the midst of a newsworthy year when a new deadly flu strain started to spread across the globe.

It’s been reported that the first outbreak in the United States was in March 1918. A private in the U.S. Army at Fort Riley, KS, complained of flu-like symptoms; hours later, 100 of his fellow soldiers reported similar symptoms. During this time, the U.S. was sending soldiers by the hundreds of thousands across the Atlantic and into war.

In April 1918, the first mention of influenza appears on April 5 in a public health report. The report discusses 18 severe cases and three deaths in Kansas. Between September and November 1918, the second wave of the epidemic peaks in the United States. The second wave was extremely fatal and responsible for most deaths associated with the pandemic. An estimated 195,000 Americans die of the “flu” in October alone. Philadelphia is hit hard when more than 500 bodies await burial for more than a week. A manufacturer of trolley cars donates 200 packing crates to be used as coffins. By December the Committee of American Public Health Association encourages stores and factories to stagger hours and ask people to avoid using public transportation.

The illness at the time was dubbed “The Spanish Flu” because of where it was thought to have originated. The symptoms were headache, sore throat, high fever, cough, dizziness, and heavy perspiration. Often bronchial pneumonia would develop, and death would occur in many cases. This strain of flu, unlike COVID-19, was deadliest to healthy young adults and children.

The virus started its spread throughout Nebraska just as WW1 was winding down.

The growing number of cases weren’t often reported in 1918 due to wartime censorship.

During World War I, the United States and many other countries would censor “lousy news.”

Spain was not in the war, and countries involved in the war didn’t want the other side to know they were suffering from this mysterious illness. Spain was neutral in the war and didn’t censor press reports of the growing illness to hide it from their enemies, so many thought the “flu” originated there.

The “flu” reached Nebraska by October of 1918. Omaha reported its first case on October 3.

On October 7, the state of Nebraska ordered the closings of all “schools, churches, places of entertainment or public congregation, pool halls, and other places of amusement.” Mail carriers continued their rounds but wore face masks for protection.

In October 1918, the Falls City News reported that even though King Alfonso of Spain was gravely ill with the “flu,” Spanish authorities refute any claim to influenza as the “Spanish” disease.

“If the people of this country do not take care, the epidemic will become so widespread throughout the United States that soon we shall hear the diseased called “American” influenza,” said the Falls City News.

What is Spanish Influenza? Is it something new? Does it come from Spain?

“The Flu disease now occurring in this country and called “Spanish Influenza” resembles a very contagious kind of ‘cold’ accompanied by fever, pain in the head, eyes, ears, back or other parts of the body and a feeling of severe sickness. In most cases, the symptoms disappear after three or four days. The patient then rapidly recover. Some of the patients, however, develop pneumonia, or inflammation of the ear, or meningitis, and many of these complicated cases die. It is not yet known whether this so-called “Spanish” influenza is identical to the influenza of earlier years.  There have been numerous epidemics of the influenza. In 1889 and 1890, an outbreak of influenza starting somewhere in the Orient spread first to Russia and thence over practically the entire civilized world. Three years later, there was another flare-up of the disease. Both times the epidemic spread widely over the United States.

What is the course of the disease? Do people die of it?

“Ordinarily, the fever lasts from three to four days, and the patient recovers. But while the proportion of deaths in the present epidemic has generally been low, in some places the outbreak has been severe, and deaths have been numerous. When death occurs, it is usually the result of a complication.”

What should be done by those who catch the disease?

“It is very important that every person who becomes sick with influenza should go home and go to bed at once. This will keep away dangerous complications and will, at the same time, keep the patient from carrying the disease far and wide. It is highly desirable that no one is allowed to sleep in the same room with the patient. In fact, no one but the nurse should be allowed in the room. If there is cough and sputum or running of the eyes and nose, care should be taken that all such discharges are collected on bits of gauze or rag or paper napkins and burned. If the patient complains of fever and headache, they should be given water to drink, a cold compress to the forehead and a light sponge. Only such medicine should be given as is prescribed by the doctor. It is foolish to ask the druggist to prescribe, and it may be dangerous to take the so-called ‘safe, sure, and harmless’ remedies advertised by patent medicine manufacturers. If the patient is so situated that they can be attended by only someone who must also look after others in the family, it is advisable that they wear a wrapper, apron or gown over their ordinary house clothes while in the sick room and slip this off when leaving to look after others. Nurses and attendants will do well to guard against breathing in dangerous disease germs by wearing a simple fold of gauze or mask while near the patient.”

Will, a person who has had influenza before catch the disease again?

“It is well known that an attack of measles or scarlet fever or smallpox usually protects a person against another attack of the same disease. This appears not to be true of “Spanish influenza.” According to newspaper reports, the King of Spain suffered an attack of influenza during the epidemic thirty years ago and was again stricken during the recent outbreak.

How can one guard against influenza?

“In guarding against disease of all kinds, it is essential that the body be kept strong and able to fight off disease germs. This can be done by having a proper proportion of work, play and rest, by keeping the body well, and by eating sufficient wholesome and properly selected food. In connection with diet, it is well to remember that milk is one of the best all-around foods obtainable for adults as well as children. As far as a disease like influenza is concerned, health authorities everywhere recognize the very close relationship between its spread and overcrowding. The value of fresh air through open windows cannot be overemphasized. When crowding is unavoidable, as, in streetcars, care should be taken to keep the face turned as not to directly inhale the air breathed out by another person. It is especially essential to beware of the person who coughs or sneezes without covering their mouth and nose. Make every possible effort to breathe as much pure air as possible.

Days later, the Falls City Journal reported that there were many explanations as to how the “flu” was spread.

“It is generally admitted that the main way is through the coughing, sneezing, and mucus of these persons who have the disease. It is also becoming apparent that the germ is carried by air, and many cases are contracted in this way. However, it is safe to say that 90 percent of the cases are contacted by people who are slightly ill and continue to work as usual. There is no possible way to reach these perpendicular cases except through persons themselves. Every person is intelligent enough to know when they are sick. A man is criminally negligent who continues to do business as usual when he has the symptoms of influenza. He may throw it off but will infect many other people who will not throw it off. If he doesn’t care for his friends, he should take the precaution for his own sake. Why not have several influenza masks in your home as a safeguard. They are easily made and inexpensive.”

How to prevent Spanish Influenza

Local newspapers shared a story with tips on how to prevent the ‘flu.’ It stated that you must be clean inside and out with special emphasis on the “inside.” “There must be no fermentation of food, beginning in the stomach. To prevent this condition your diet must be such that food doesn’t ferment. It must be digested easily and quickly. Do not eat without appetite. Eat foods that ensure a proper activity of the stomach like spinach, cabbage and all sorts of green stuff. Long walks are another valuable means of purifying the blood and cleansing the internal system. Open windows are essential for the sleeping room. Rise early and exercise for ten minutes to half and hour. Follow with a dry friction bath. Rub the body with the hands a rough towel or brush. Clothe the body sufficiently to maintain warmth. A body that is cared for properly pulsates with the elements of live and vitality, which makes disease of every kind impossible.

The Falls City News reported the first case of the ‘flu’ in mid-October. “The ‘flu’ is said to be epidemic at Auburn and Hiawatha. Schools, picture shows, churches have been closed at both places, and all public gatherings are prohibited. So far, one case has been reported in Falls City, but it can hardly be expected that the town will escape the disease’s ravages. In some states, notably Colorado, the schools have been ordered closed, even when the disease has not appeared, and every precaution taken to end the disaster. “

Much like the COVID-19 toilet paper uproar, in 1918, everyone seemed to be hoarding Vick’s VapoRub. On October 21, 1918, the Falls City Journal ran several ads for Vicks telling druggists that VapoRub had been oversold due to the present epidemic.

“Tremendous demand the last few days has wiped out excess stocks that we had estimated would last until next January. Last week’s orders called for one and three quarter million jars. Today’s orders alone amount to 932,459 jars. Big shipments are en route to jobbers. Until these arrive, there may be a temporary shortage, all deals postponed, but in small lots only.

Retailers can get immediate shipments direct by parcel post.”

The next day, on October 22, 1918, the Falls City News reported that local schools would close and statewide quarantine rules were issued for home affected by the flu.

The way COVID-19 and the “flu” spread are similar, but the viruses are in fact very different.

Next week we’ll take a look at how Falls City acted and sometimes reacted as the “flu” engulfed  Richardson County.