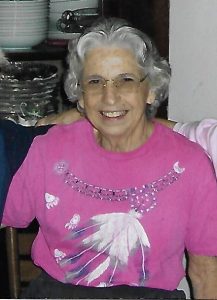 Marian Florence (Ulmer) Leatherman, 96, passed away on May 30, 2020, at Colonial Acres Nursing Home in Humboldt, Nebraska. She was born on December 31, 1923, in a rural home built by her father. She was the fifth of six children born to Reuben and True (Stratton) Ulmer. Marian graduated from the Dawson Public School in 1941. She worked in Omaha as a typist before she married Wayne Leatherman on October 17, 1942, in Tucson, AZ, where he was serving in the U.S. Air Force. They returned to Nebraska in 1943. Marian lived in the Humboldt-Dawson area for the remainder of her life, primarily in her original family home north of Dawson.

Marian joined the Evangelical United Brethren Church and remained a member after it became the United Methodist Church. She was active in the choir led by her father, and also served as church secretary for several years. She was employed as the secretary for the Dawson-Verdon School and the school board for 30 years, serving under nine different superintendents, retiring in 1993. Marian had a love for music and enjoyed singing with her beautiful alto voice. She learned to play the piano and violin as a child and played the organ later in life. One of her favorite memories when growing up was all the music in her home.

A gifted craftswoman, Marian made quilts, tapestries, baskets, and stained-glass creations. She loved reading, chocolate, Jeopardy, and was a crossword puzzle master. She continued to live in her farm home until entering the Colonial Acres Nursing Home in 2014.

She was preceded in death by her husband, Wayne; son Christopher; four sisters, Evelyn, Lorraine, Sylvia, and Nadine; a brother, Ernest; and three great-grandchildren, Stephan, Brittany, and Bethany.

Graveside Services will be held at 11:00 a.m. on Wednesday, June 3, 2020, at the Heim Cemetery in Dawson, Nebraska, with Pastor Howard Blecha officiating. Due to the COVID 19 restrictions, services for Marian will be broadcast live on f.m. radio station 88.7 for those wanting to attend.