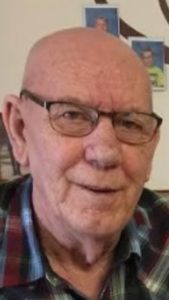 ended Beaver City Public Schools, graduating with the Class of 1957. Shortly after graduation, he went to work for Burlington Northern Railroad becoming a Crew Leader building new track, repairing track line and clearing derailments mostly in Wyoming. On January 3, 1959, he married DeEtta L. Martin daughter of Harry and Marie (Lomax) Martin at the Hendley United Methodist Church in Hendley, Nebraska. To this union two children were born, Kristi Kay and Gale Richard. In 1964 Richard left Burlington Northern to take over farming and live-stock operations on the family farm. Richard also did custom swathing and baling for several other farmers in the area. Richard continued farming until the mid 80’s even though a heart attack in 1978 tried to slow him down. Richard was never content to sit back and relax, so in the next few years, he helped several area farmers at various harvest times. Richard and DeEtta also operated Dunkhas Kennel and Cattery, spending many years raising purebred cats and numerous breeds of dogs. Richard also got his CDL license and drove for Richardson Trucking for many years.
Richard was a member of the Hollinger United Methodist Church where he served as Chairman of the Board.
Richard and DeEtta lived most of their married life in Hollinger and Furnas County. In 2018 they celebrated 59 years of marriage.
Richard is survived by daughter Kristi Chesterman of Beaver City, Nebraska, son Gale and wife Lori of Falls City, Nebraska; grandchildren Dawna Hall of Kearney, Nebraska, Lane Chesterman of Lincoln, Nebraska, Cay-den and Carlea Dunkhas, Clay and Sophie Keller all of Falls City, Nebraska. Great-grandchildren Ryan and Ryder Brink of Oxford, Nebraska, Darryl Chesterman of Lincoln, Nebraska and Asher Hall of Kearney, Nebraska. Sister Shirley Silver of Hayward, California. Nephews Richard and Donald Silver of Hayward, California, brothers, and sisters-in-law Helen Wolzen of Arapahoe, Nebraska, Carol and Wendell Smith, Dale, and Twila Fults all of Beaver City, Nebraska and many nieces and nephews and cousins.
Richard was preceded in death by his parents, Chriss and Margaret Dunkhas, his wife DeEtta, son-in-law Mark Chesterman, brother in law Dale Silver.
Viewing and visitation were Friday, July 26, 2019, from 6:30 PM to 8:30 PM at Wenburg Funeral Home, in Beaver City, Nebraska and prior to the service at the church. Funeral services will be Saturday, July 27, 2019, at 10:30 AM at Faith Community Church in Beaver City, Nebraska with Pastor Linda Knipping, officiating. Interment will follow at the Union Cemetery, Beaver City, Nebraska. Memorials Wenburg Funeral Home of Beaver City, Nebraska is in charge of the arrangements. Condolences or personal reflections may be left at wenburgfuner-alhome.com