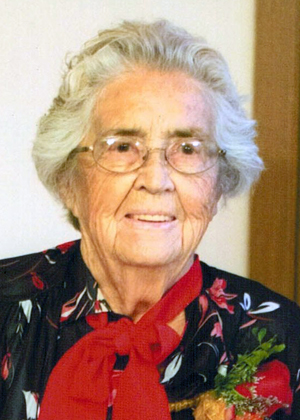 Vera attended and graduated from the Little Cottonwood Country School and then Bigelow High School. Rex Gardner and Vera were married in Mound City, MO, on Oct. 20, 1932. They lived in Bigelow, then Craig, MO, Hamburg, IA, and finally Nemaha. Born to this marriage were Gary, Ronald and Janice. Patrick was later adopted. It was in Nemaha that Rex and Vera started farming and there that Rex passed away at the age of 60. After five years alone, Vera married Delbert Duerfeldt. Delbert passed away after seven years of marriage.

Vera grew up on the farm during the Great Depression. While raising her family on the farm west of Nemaha, there were cows to milk, chickens to be fed (many butchered and sold), eggs to gather, butter, cream and cottage cheese to be made and sold and vegetables from a large garden to can or freeze. Her work in the church and attendance was never slighted, nor was any community work. She was also a faithful Rebekah Lodge member, holding every office and was a 60-year member.

With the family grown, Vera pursued her love of flowers and gardening. There was always something blooming in her yard and garden. She took many prizes at flower shows at the County Fairs and shared her plants with anyone who wanted them. Vera was also mindful of community needs. She was one of a group working to attain a Senior Citizens Bus to be used in transporting elderly for shopping, doctor appointments or visiting. Vera was also a member of the Good Samaritan Board for seven years and enjoyed this as it gave her the opportunity to see and visit with many of her friends there. She was also involved in building an assisted living facility in Auburn.