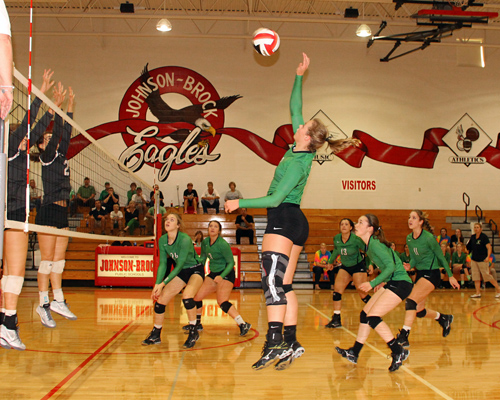 By Libby Dunn
The Sacred Heart Lady Irish played their first Pioneer Conference match at the Sacred Heart RAC on Monday, Oct. 17 against the Lourdes Central Catholic Lady Knights. The Irish came ready to defeat the Knights whom they had previously lost to twice and beat once.
Although the Knights showed up just as ready to play, the Irish pulled through to defeat the Knights in a three set match 25-21, 22-25, and 25-17.
While the Lady Irish proved to be the better team in the first set, the Knights came into the second set with determination. The Lady Knights led through the whole set, having a lengthy 20-10 lead on the Irish at one point.  After the Lady Irish fought to come back, the Knights still won the set by three points.
Although the Irish led the third set in the beginning, the Knights didn’t give up. At one point in the set, the Knights came back to tie the set 13-13, but the Irish eventually pulled ahead to win the final set.
Senior Haylee Heits led the team in kills with 10, while senior Jade Hill added nine to the team’s total 34 kills. Junior Sara Wertenberger also added five kills, and had the team’s only three blocks of the game. Heits, Hill, and sophomore Randee Witt led the team in aced serves having two each.
After their win, the Lady Irish traveled to Johnson on Tuesday night to face the Diller-Odell Griffins in the second round of the Pioneer Conference. Although the Lady Irish started off strong in the first set winning 25-19, the Griffins kicked it into gear and beat the Irish in the next three sets 25-20, 25-8, and 25-20.
The Irish were led in kills by Heits with 12, while Hill added seven and Wertenberger added six. Sophomore Ahren Ebel led the team in digs with 22, while Heits added 21 to the team’s overall 87 digs. The Irish had a total of seven aced serves, with Senior Lexi Barnes and Ebel having two each, and senior Libby Dunn, Hill, and Heits having one each. The Lady Irish then went on to play at Johnson on Friday night against the Friend Bulldogs. The Irish defeated the Bulldogs 3-2 to place third in the Pioneer Conference.
Going into five sets, the game proved to be an equal matchup between the Irish and the Bulldogs. The Lady Irish lost the first set 25-26, but came back to win the next set 25-22. Friend then won the third set 25-19, and Sacred Heart fought to win the fourth set 25-21. The fifth set proved to be just as close as the preceding sets, but the Irish pulled ahead in the end to win 16-14.
The Irish were led in kills by Hill with 19, while Heits also added 18 to the Irish victory. Hill also led the team in blocks having 8 of the team’s total 20 blocks. Heits and Wertenberger also added 6 blocks each.
Witt led the team in digs with a total of 23, and along with Barnes, led the team in aced serves.
“We started the week well by beating Lourdes, who we have had to play numerous times, so we were pretty excited,” Heits said. “Even though we lost to Diller-Odell in the second round, we still kept our heads high and came back strong to win the third place game.”
The Lady Irish will play again on Tuesday, Oct. 25 in a triangular with Sterling and Lourdes Central Catholic hosted by Sterling.