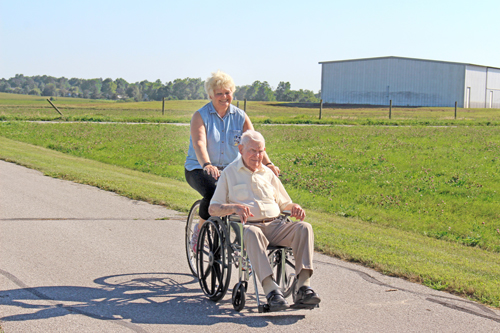 By Nikki McKim
For the last ten years Gene Tennison’s world has slowly gotten darker and quieter than it once had been. At 95 years old Gene lives by himself in a small apartment in Missouri slowly losing both his eye sight and hearing. Along with losing those important senses, Gene’s spirit has suffered as well.
Sandra Chaffee of Falls City has watched her father (Gene) slowly slip away from the vibrant man he had once been.
“Without sight or vision and the inability to walk unassisted, it left little for him to enjoy” said Sandra.
Recently everything changed. Sandra brought her dad to Falls City for an extended stay with her and her husband Phil. As she got ready to welcome her dad she  came across a video on Facebook that she knew her father would love. With the help of her husband Phil, Sandra devised a plan to build a device that would help her father feel the sun on his face and the breeze in his hair again.
Sandra searched for a wheelchair that she could use and contacted In-Home Health Care in Falls City to see if she could get one to suit her plan. Once she explained what she had planned to do, the wonderful ladies at In-Home Health gave her the wheel chair with the promise of letting them see how it came out in the end.
After a bit of work and the use of an old bike, Sandra’s idea came to life.
The moment of truth came when she presented her labor of love to her dad. The bicycle was attahced  to the back of a wheelchair, giving her dad a bit of freedom to ride as someone peddled and steered the bicycle.
Gene grinned from ear to hear as he gently lifted his chin to feel the warm Nebraska breeze hit his face.  From that moment on he was hooked.
“For nearly two weeks now he has lit up at the beginning of each day,” said Sandra.
The man who had spent his days alone, in the darkness of his home can now fly. Gene has been enjoying his time with his family and doesn’t seem to mind that Nebraska heat as much as we do. He’s just thankful that he gets to be outside with the sun on his skin and the wind in his face. His daughter coming across that video and the ladies at In-Home Health gave him his spark back.
“It’s truly been priceless to see him smile and laugh,” said Sandra.