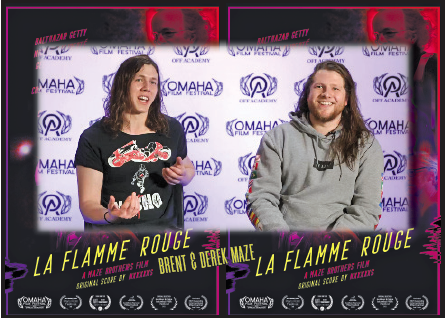 Most filmmakers spend their entire careers working toward the dream of seeing their hard work creating a feature film end on a big screen, only to never see it come to fruition.

On Saturday, March 13, Falls City natives Brent and Derek Maze, along with a theater full of family, friends and fans, saw that dream become a reality.

La Flamme Rouge marked the directorial debut of the Maze Brothers and made it’s world premiere at the 16th Annual Omaha Film Festival.

Ambulance was shot almost entirely at night, in the alley between 18th and 19th and Harlan and Stone Streets over a weekend in June 2014. The story picks up after a man (played by Tyler Sells, another Falls City native) has been violently beaten and left for dead. It follows the interactions between the two men; the victim and a passerby, as they wait for an ambulance to arrive.

The following year Brent returned to Falls City, a senior at UNL, to hold a film fundraiser to fund his latest project, at the Falls City Country Club (now Classic Club 8).

Five of his short films were shown, including:

Infinite, where a series of visits to his psychiatrist, a young man finds his way to the roots of a mysterious recurring dream but discovers much more than he bargained for;

The Shed of Our Skin, an exhausted detective, turns to a colleague for information in an attempt to finally get one step ahead of a sociopath he has been hunting for years;

Identity of Another, this heavily stylized neo-noir short film, examines the frantic yet suspenseful aftermath of a young criminal’s most recent hit. Through a turn of events, he is forced into impersonating the man he just disposed of;

Kale and Marco Witness a Murder, in this short comedy, two young stoners accidentally become witnesses to a brutal murder. However, after being paid off by the killer with a briefcase full of cash, they have a difficult decision ahead of them.

Maze was looking for financial help for Faces and Stones; A man must insert himself into a cult organization for the woman he loves, which he had hoped to start shooting the following month.

Brothers Derek and Brent Maze, graduates of Falls City High School and the renowned Johnny Carson School of Theater and Film and College of Journalism and Mass Communications at UNL, went on to work mainly in the music video world, winning awards for their cinematography. Still, they decided they wanted to make a move into features.

“We were like, what film do we want to make? So we decided to turn this short into a feature,” said Brent.

What had started as a short when Brent was in film school was now being transformed into a full-length feature film.

“The concept was there, but when you turn a short into a film, you have to build all this frame-work,” said Derek.

Writing as a team

They describe their writing style as creating moments, tones and events you want to see, then finding a way to link them all together.

“It didn’t take that long. It was just writing it in two script format. It probably took a couple of months,” said Derek.

They wrote what they wanted for the film on note cards and spread them around everywhere. “That was an interesting one to do, our writing style has developed a lot differently since then, but it really worked for the type of movie it was. This very whimsical, dreamy, trippy-like structure. It matches the way we wrote it,” said Brent.

He said writing together is good because they have a constant check and balance as they write, which accelerates the process of getting to a good creative place.

“The one person that’s going to tell me if I have a stupid idea is him [Derek],” said Brent.

La Flamme Rouge [The Red Flame] is a nocturnal suspense thriller about an injured professional cyclist and a renegade detective who navigates the bizarre criminal underbelly of a steroid ring intertwined with money laundering through the exclusive art world.

The Maze Brothers said their uncle would ride behind the Tour De France. So they grew up knowing a bit about that world and they say, “make what you know.” However, they admit they don’t know anything about drug trafficking; but they did know a thing or two about fusing excellent aesthetics and memorable characters that could fill out an incredible cast that bring out the best visuals.

“The main character is a retired injured cyclist. La Flamme Rouge is a cycling term for ‘end of the race,’ it’s kind of like a chaotic end to his race, so to speak,” said Derek.

Thanks to LB840/863, a Municipal incentive, not a state-sponsored incentive, the Maze Brothers could obtain funding from Fremont after voter approval to collect and appropriate local tax dollars for economic development uses.

Brent had to go before the Fremont City Council in April 2019 to get the Film Incentive Program rebate approved. The Council unanimously approved a rebate of no more than $35,000 one month before shooting. The City Council approved an application to the Film Incentive Program from the Red Flame, LLC approving a rebate in the amount of 30 percent of local expenditures, estimated to be at $97,000. The estimated rebate amount was $29,100; the resolution capped the total rebate at $35,000 if the film’s budget were to exceed the estimated $97,000.

La Flamme Rouge producer Ehren Parks grew up in Fremont and assured the Council at the time that many of the people working on the film would be local hires living within 50 miles of Fremont.

The Council asked about nudity in the film and the use of firearms, asking how weapons would be controlled onset and if they were live weapons or props. Parks assured the Council that the film production team would be working with a local business to acquire prop weapons for use in the film and coordinate with local law enforcement concerning weapons and closer of any roads for use of scenes shot for the film. The film doesn’t include any nudity.

Falls City is listed as a community that participates with LB840 funds, according to film.nebraska.gov.

The majority of the film was shot in Fremont, but production had to branch out to Lincoln and Omaha for a couple of locations. The Kiechel Fine Art Gallery in Lincoln was used as a shooting location and the character of Dr. J’s home was shot in Omaha.

“Right before we shot, there was a catastrophic flood,” said Brent. “It’s a bad thing that happened. We were lucky enough to pull through and use all the resources we needed, and it was hard, but we did it.”

Shot in May 2019, two months after floodwaters had surrounded the town of Fremont nestled between the Platte River and the Elkhorn River, leaving the city an island, the Maze brothers said many of the roads planned for driving scenes were washed away.

“There weren’t enough available hotel rooms, because there were so many people put out of their homes. We made it through, said Brent. “That was obviously the hardest part of shooting in Fremont. It really wasn’t in shape for us to shoot when we did.”

Brent turned to social media for casting and it turned out to be a wise move. The guys loved another “small town turned big filmmaker,” David Lynch.

“One of our heroes is David Lynch and he’s from a small town if that says anything,” said Derek. “One of our idols showed us that you can make something incredible, fusing things together and putting a surrealistic twist on it.”

One of the great Lynch surrealistic masterpieces they enjoyed was Twin Peaks and they loved the cast. Hoping they could get some of the Twin Peaks characters to convey that same strange feel in their film, they started to go after those “Lynchian” actors who could do just that.

“We got on Twitter to get George Griffith (Twin Peaks: The Return) and Todd Lowe (Gilmore Girls and True Blood). We essentially reached out on social media to some of these people, gave them a script and they were like, hell yeah!” said Brent. “Todd’s [Lowe] agent liked the script and from there, he sent it to Heidi Levett and Lisa Essary.”

Heidi Levett is a Los Angeles-based casting director who has cast films like the Academy Award-winning Best Picture, The Artist, and movies directed by Oliver Stone and others. Lisa Essary is a casting director/producer who has won numerous awards for her commercial casting and has cast for features.

They went from reaching out to people on Twitter to someone with direct contact with their envisioned cast.

Levett and Essary loved the script for La Flamme Rouge. Brent credits Essary for her hard work getting many self-tapes [remote audition] for casting the auxiliary characters, such as Sebastian Quinn (Dynasty and The Affair).

Quinn, who was in Omaha for the premiere of La Flamme Rouge, said, “I auditioned the old-fashioned way. I got to meet them afterward. We had a long call to discuss the tone of the film. That’s when you could tell that they had a specific vision about it. You really feel like you’re entering a world that’s been thought out and crafted. It makes it easier for me from an actor’s perspective figuring out the tone.”

Derek and Brent liked what they saw and they liked Quinn’s approach.

“The self-tapes were incredible,” said Derek. “Casting is so invaluable. You don’t think it’s going to help you that much until you’re really in that environment and you’re logging into a portal and you’re seeing guys like Sebastian knock it out of the park and you’re seeing people from other roles that are just incredible and you know who they in your head you’re like they’re reading my script.”

They said it helped with prep time on the budget, knowing the right actors understood the film’s tone going into it.

“You know there’s humor in this. It’s not just a traditional action movie. It draws heavily from David Lynch. It has Japanese influences; we talked about that, so you know what to expect; I know what I can bring to the table,” said Quinn.

Everyone else was cast, but they still didn’t have a lead. Then the call came.

To be continued next week.