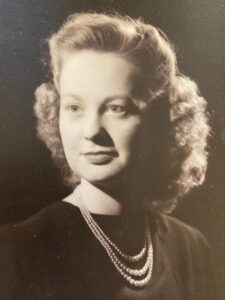 Virginia was born on December 21, 1921 in Falls City, NE, the daughter of Causa and Theresa Marie (Vohl) Winkler. She attended school in Falls City and graduated from Falls City High School with the class of 1939.

She was united in marriage to Edward Leroy Rodgers on June 20, 1943 in Reserve, KS. To this union two children were born: Jenifer and Jeffrey.

She worked for many years as a receptionist for eye doctors Dr. Wilmes and later Dr. Quinn.

She was preceded in death by her husband, Edward Rodgers; her parents; and brother Kenneth Winkler.

Remembrances may be left at www.gudefuneralhomes.com.

Gude Mortuary in Nebr. City is in charge of arrangements.