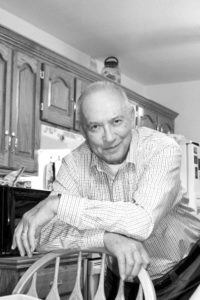 Gerald Eugene Schmid, 92, of rural Dawson was born on May 6, 1927, at the family farm near Dawson, Nebraska to Samuel and Minna (Grossenbacher) Schmid and became an older brother to his sister, Donna (Kenyon) Phillips. He grew up in rural Dawson, and graduated from the eight grade at Middleburg country school and then attended Sabetha High School graduating with the class of 1944. After high school, he joined the United States Army and served in the Korean War. After his discharge, he returned to the farm and his future wife, Mary Irene Church.

On October 5, 1947, Gerald was united in marriage to Mary Irene Church at Zion United Church of Christ in Dawson. To this union, three sons; Jerry, Robert, and Mark were born. The couple made their home in the Middleburg area where Gerald and Irene were members of the Zion United Church south of Dawson.  They would later change affiliation to the Four-Mile Church. It was at their Middleburg home where Gerald and Irene worked the combined family farms for the remainder of their lives.

Gerald and Irene were married for over 61 years. Gerald served as a church board member, served on the Dawson Co-op Board, and as a boys 4-H Club instructor for several years. He served on the Election Board and was also on the Humboldt Public School Board. Gerald loved hunting, fishing and traveling to the Colorado Rockies and in later years to Hawaii.

He loved farming and raising cattle, but he dearly loved his family and friends. He was happy to have lived all of his life, with the exception of his final two months on the family farm. He will be greatly missed.

Gerald passed away on Saturday, September 21, 2019, at the Apostolic Christian Home in Sabetha, Kansas having reached the age of ninety-two years, four months and fifteen days.

He was preceded in death by his parents; wife Mary Irene, daughter-in-law Vickie Schmid and brother-in-law Richard Church.

Funeral Services were held at 10:30 a.m. on Wednesday, September 25, 2019, at The Four-Mile Congregational Church South of Humboldt, Nebraska with Rev. Jerry Schmid officiating.

Interment was at The Four-Mile Cemetery with full military honors conducted by the Nebraska Army Honor Guard.

Memorials contributions may be given to the family’s choice with a later designation.