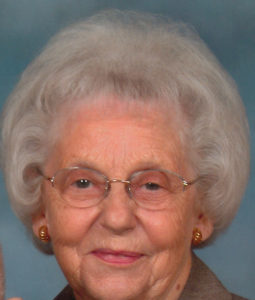 Josephine E. “Jo” Jimeson, of Hiawatha, passed away surrounded by her family Friday morning, June 7, 2019, at the Hiawatha Community Hospital.  She was 96 years old. She previously had been a resident of Maple Heights Nursing Home in Hiawatha for a few years.

Jo was born on the family homestead northwest of Rulo, NE on August 25, 1922, one of five children of Barney and Mary Santo Wissman.  She grew up on the family farm where she assisted her family with the farm duties: gardening, working with chickens, even helping milk the cows.  Jo attended and graduated 8th grade from Ft. Hazel country school near Rulo, before graduating from Falls City High School with the class of 1940.  After high school, she worked at Flannagan’s Grill and as a bookkeeper for a Falls City bank.

She was engaged to Lloyd E. “Frosty” Jimeson and waited till after his discharge from the Army Air Corps where he served in World War II.

They married August 23, 1945, at Immaculate Conception Catholic Church at Rulo.  Before making the decision to settle in Hiawatha, they traveled to Washington and Colorado for potential places to locate work to be near family.  They made the decision to make Hiawatha their home and lived here nearly all of their married life.  Frosty worked as a mechanic for Hiawatha Motor Co. until 1955 when they purchased land and moved their current house from Mercier, built a garage, and opened an auto, truck, and tractor repair business known as Jimeson Motor Service in Hiawatha.  Jo worked as a bookkeeper for the business until they retired in 2000.  They also enjoyed their property and home at Perry Lake.  Frosty died January 5, 2014.

The Hiawatha community was very important to Jo.  She treated people the same, no one was better than anyone else.  She genuinely was interested in others, always had time to visit, and always had a smile.  Her faith and church, St. Ann Catholic Church in Hiawatha, was a big part of her life.  She served on the Altar society of the Church and was past president. She had twenty plus years as the First Communion class teacher, served at Eucharistic Minister, and also was Eucharistic Minister for the homebound and nursing home residents.  Jo was active in her community:  was a lifetime member of auxiliaries to VFW Post #5210, and Homer-White Post #66, American Legion, both of Hiawatha.  She was busy with various church and card clubs; the PTA when the boys were younger; and was cub scout den mother troop #7.    In her spare time, she was cooking and baking.

She was preceded in death by her parents, siblings:  Elmer John Wissman, Mary Carr, Vernal Wissman, and Margaret Herbster.

Mass of Christian Burial will be celebrated at 12 noon Thursday, June 13, at St. Ann Catholic Church in Hiawatha.  Father Dan Gardner will be the celebrant.  Interment will follow at the Hiawatha Cemetery.

Friends may call at Chapel Oaks Funeral Home in Hiawatha after 10 a.m. Wednesday where the parish rosary will be recited at 6 p.m., followed by visitation.

Memorial contributions are suggested to the Josephine Jimeson Memorial Fund, sent in care of the funeral home, 124 S 7th St., 66434.