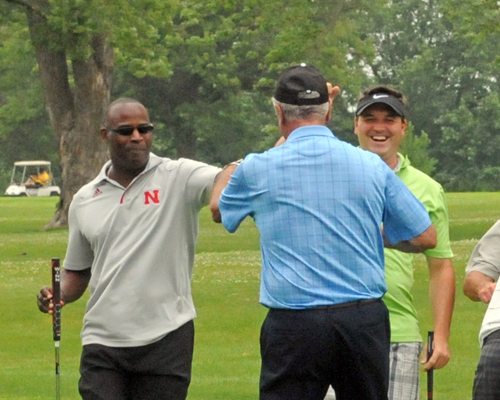 The Community Medical Center in Falls City is set to host its Seventh Annual Golf Fore Good Health Golf Tournament on Friday, June 30. The tournament will take place at the Class Club 8, formerly the Falls City County Club.
The two-day event will feature a fish fry on Thursday, June 29 at the Harkendorff Event Center. Doors will open at 6:00 p.m.
Friday the tournament will feature special guests, the five offensive linemen from the 1994 Husker National Championship team, also known as ‘The Pipeline.’ Nebraska “Pipeline” commonly refers to the offensive line for Coach Tom Osborne’s 1994 National Championship team. This unit is often regarded as one of the best all time in college football.
Zach Wiegert, from Fremont Nebraska, was an offensive guard at Nebraska for 1991-1994. Zach was a first team All- Big Eight selection in 1992, 1993 and 1994.  After his college career at Nebraska Zach played in the NFL from 1995-2006.
Brenden Stai also played for the Huskers from 1991-1994.  Brenden was a key member of the line that won the National Championship over the Miami Hurricanes in 1994. Stai was an All-Conference selection in 1994 and he played for eight seasons in the NFL after his college career concluded.
Aaron Graham played Center for the “Pipeline” and was an Academic All-American in 1995 and an All-Conference pick in 1994 and 1995.  Graham played his high school ball in Texas and had a six year NFL career for three different teams.
Rob Zatechka made the long journey across town from Lincoln East to play for Coach Osborne. Rob, an offensive tackle, was a two time Academic All-American in 1993 and again in 1994.  After finishing his college football career Rob played for the New York Giants for three years.
Joel Wilks was an offensive guard from Hastings Nebraska. He primarily played left guard, however in the 1994 Orange Bowl he moved to right guard to take advantage of match ups on the line. Wilks played his position at 280 pounds and as a former walk on he led the 1994 team in “pancake” blocks.
For more information on the tournament or to sponsor or play in the event, contact Linda Santo at Community Medical Center, Falls City.