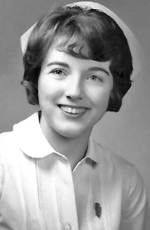 She attended Pine Ridge Country School and graduated from Humboldt High School with the Class of 1963. After graduating, Alberta continued her education by attending nursing school at Lincoln General Hospital. While attending nursing school, she got to know John Cander from Humboldt. They didn’t know of each other though they attended the same high school. John was attending college in Lincoln and Alberta would ask for rides back home. After a while, the rides home turned from studying at the ag library (for John) to studying at LGH (with Alberta). They both graduated, so they did study.  John proposed in the spring of 1966 at Pioneer Park, stating a fact, “that as a dairy farmers wife, there would probably be no vacations.” Alberta paused for a bit and still said “yes.” The couple were united in marriage on Alberta’s birthday on July 9, 1967, at the United Methodist Church in Humboldt. To this union two children, Sus and Tom were born.

Alberta worked as a Registered Nurse for the Nemaha County Hospital from August of 1966 to June of 1967; the Humboldt Community Memorial Hospital from November of 1967 to June 1973; the Colonial Acres Nursing Home from January 1975 to October 1985; Humboldt Family Clinic from January 1986 to August 1988; and back to Colonial Acres, where she taught nurse’s aid classes from December of 1988 to April 1995. She was diagnosed with multiple sclerosis in 1994 through an eye exam and retired a few years later.

She was preceded in death by her parents; and sister-in-law, Betty (Cander) McKinzie.

Although we have lost Alberta, our family believes that we have “won” in providing her with comfort and nearly 72 years of “the Nebraska Good Life.” As of her request, Alberta wishes to continue her nursing career by donating her body to the Creighton Medical Center.