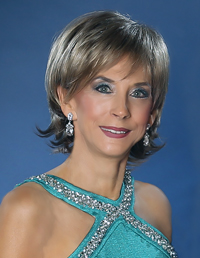 Judith Ann Herbster of Falls City, passed away on Tuesday, May 2, 2017 in Falls City. She was born April 2, 1955 in WaKeeney, KS, to Robert E. Wagg and Doris A. (Armbruster Wagg) Peterson. Judy spent her childhood in Ogallah, KS.

Judy loved children, and was a daycare provider upon her 1973 graduation from Trego Community High School in Wakeeney, until she became a Conklin Company distributor in 1979. Little did she know, her decision to join Conklin would change her life forever.

Meeting her husband, Charles W. Herbster, through the company she already loved, on June 26, 1982, they were married at Christview Christian Church in Tulsa, OK.

To say Judy was passionate about Conkin was an understatement. She was a champion of the business and paved the way for women in the company. Judy was the first woman President’s Club member in 1980; the first female Director in 1982; the first Conklin Director to develop five directors in one year; and the first lady to receive the “Director of the Year” Award in 1985. A role model for many, Judy became the first and only woman president of the Conklin company in its 48-year history. Seeing the potential in the corporation, Charles and Judy purchased the company in 1992. Soon after, she was appointed as President and Chief Operating Officer and served as such until her passing.

In addition to her involvement with Conklin, she worked hand in hand with Charles at their companies: Herbster Angus Farms, Inc. and Carico Farms, Inc., both in Falls City. All three operations are rooted deeply in agriculture, and Judy was dedicated and instrumental to their unparalleled success.

Judy said recently, “Live everyday with no regrets.” She put her heart into everything, including cooking meals for the farm family, inspiring corporate excellence and caring for those in need. Judy was a dear friend and uplifting mentor who demanded perfection, pushed for greatness and jubilantly celebrated success. Judy’s legacy of hard-work, desire to serve and devotion to excellence will remain in the lives of every person she met. From her humble youth in WaKeeney, to becoming the President and Chief Operating Officer of a nearly $100 million company, she lived the American Dream!

Judy was a member of Bible Baptist Church at Lincoln, and the American Angus Association.

She was preceded in death by a sister in infancy, Jeanne.

In lieu of flowers, memorials may be made to the Judith A. Herbster Foundation, which gives aid to hard-working students with financial need. Donations can be sent to: Herbster Angus Farms, P.O. Box 549, Falls City, NE 68355.