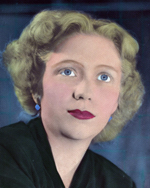 She had one brother, Gerald Timothy. She attended Sacred Heart School in Falls City, where she studied Latin and acquired the skills to become a lifelong writer of beautiful prose in perfect penmanship. She graduated in 1950 and married William F. Wenz on Oct. 11, 1950 at Sts. Peter and Paul Church in Falls City.  Bill and Jane lived in Omaha and an acreage in Union while raising eight children together before finally settling in Crete in 1974.
Her adult life was shaped by a longing for closeness to her Creator, her love for her God and an unwavering devotion to her husband and family. One of the founding members of Crete Berean Church, Jane also owned and operated The House of Praise, a Christian bookstore in Crete, from 1985-1990.  In later years, she became a naturalist, without labeling herself as such, devoting hours to the feeding of birds, the prolific planting of trees, and the cultivation of any and every flower that could survive the prairie winds on her hilltop home. Being an excellent cook and presenting mountains of elaborately wrapped Christmas and birthday gifts to children and adults were traits she was also known for. Jane also spent endless hours in intercessory prayer for family, friends and strangers.

She lent a sympathetic ear to many, in and out of her family circle, and shared wisdom earned through decades of personal triumphs, trials and tragedies. While known for being compassionate, loving and giving, those who knew her well also understood that you did not want to be the recipient of Jane Anne “getting her Irish up”.  Although she kept her gazed fixed on God, she devoted her earthly life to her family. While being clear-eyed about the faults and frailties of each, she remained always fiercely loyal to all of her progeny.

Jane was preceded in death by her parents; her husband, William, in December 2014; a son, Timothy Paul Wenz; and daughter-in-law, Shannon Wenz.

She is survived by her brother, Jerry (Carol) Timothy; children and spouses, Kathleen Wenz and Curt McKean, of Omaha, William “Bill” Wenz, of Dorchester, James (Mary) Wenz, of Roca, Laura (Gary) Gammel, Douglas and Deborah Wenz, and Jeffrey and Tammy Wenz, all of Crete, and Shari (Richard) Tretheway, of Lincoln; 15 grandchildren; and six great grandchildren; five nieces and nephews.