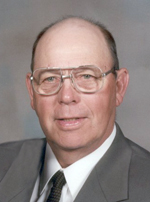 Barney grew up on a farm northeast of Falls City and attended District 29 country school and Falls City High School, where he excelled in football and track. He graduated in 1951.

After high school, he worked for Burlington Northern Railroad for a couple of years and then took employment with Massman Construction, driving pilings on the Missouri River. He married Shirley Buchholz on Nov. 3, 1956 in Falls City. In September 1957 he began working in the signal department of the Missouri Pacific Railroad (which later became Union Pacific). He retired in 1999 as a signal maintainer after 43 years of service. After retirement, he assisted at Tri State Truck & Tractor until January of this year.

Barney served in the U.S. Army from April of 1957 to April of 1959. He was stationed at Fort Hood, TX, where he was a tank driver in the 4th Armored Division; he then spent 17 months in Germany. He received the Good Conduct Medal and Sharpshooter Medal.

He loved baseball, wrestling, football and hockey. He played American Legion baseball, later on a town team, and then played softball. He coached PeeWee League ball teams for 20 years and tried to instill his zeal for the game and for life in his teams. He loved to garden and raised veggies for family and friends.

Barney was a member of St. Paul’s Evangelical Lutheran Church, 20th and Towle Streets, where he served on the church council. He was a greeter and taught a high school Sunday School class.