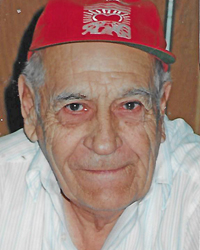 Fred L. Wittrock, 92, of Humboldt, passed away on Sunday, Feb. 19, 2017 at Community Medical Center in Falls City. He was born on March 11, 1924 in rural Falls City to Rueben and Johanna (Krueger) Wittrock.
He was raised on a farm north of Falls City, where he attended Silver Creek country school and Falls City High School. Fred was baptized and confirmed in the Lutheran faith at St. Paul’s Lutheran Church, six miles north of Falls City. He later moved his membership to St. Mark’s Lutheran Church near Verdon. After high school, Fred worked as a farmhand until being drafted on May 15, 1945 into the U.S. Army. He took his basic training in heavy artillery at Fort Sill, OK, and became a member of Military Police In New York. On Nov. 20, 1946, Fred was honorably discharged from the Army and returned to the Falls City area

to begin farming.
On Oct. 15, 1950, Fred was united in marriage to Marion Friedly at St. Mark’s Lutheran Church. To this union three children, Gary, Larry, and Cheryl, were born. The couple lived north of Falls City and later moved to the Dawson area, where Fred became employed at Lewis Implement Co. He continued to work there until his retirement in 1987. Fred loved to travel, both in the U.S. and overseas. He and Marion had visited all 50 states.
Fred was preceded in death by his parents; a brother, Kenneth Wittrock; sister-in-law, Thelma Swisegood; and brother-in-law, Gilbert Thomas.
He is survived by his wife, Marion Wittrock, of Humboldt; daughter, Cheryl (Mike) McLaughlin, of Lincoln; sons, Larry (Bev) Wittrock, of Louisville, and Gary Wittrock, of Humboldt; grandchildren, Ben McLaughlin and Jennifer McLaughlin, both of Lincoln, Tim (Beatriz) McLaughlin, of Crete, Kerry Wittrock and her special friend, Hoai Tran, of Bashore, KS, Larissa Burns, of Humboldt, Kayla Wittrock and friend Morgan, of Omaha; great-grandsons, Asante Hairl-McLaughlin, of Lincoln, Zachary and Nathaniel Burns, of Humboldt, and Ruben McLaughlin, of Crete; sister, Kathryn Thomas, of Falls City; sisters-in-law, Elaine Wittrock, of Falls City, and Hester Clark, of Houston, TX; and many nieces, nephews, relatives and friends.
Funeral services will be held at 2 p.m. Thursday, Feb. 23, 2017 at the St. James (Long Branch) Lutheran Church in rural Humboldt, with Pastors Eric and Amalia Spruth-Janssen officiating. Visitation will be from 9 a.m.-8 p.m. Wednesday at The Wherry Mortuary in Humboldt. Family will greet friends from 6-8 p.m. at the church. Inurnment at Steele Cemetery, Falls City, at a later date. Memorial contributions may be given to the family’s choice with a later designation.
www.wherrymortuary.com