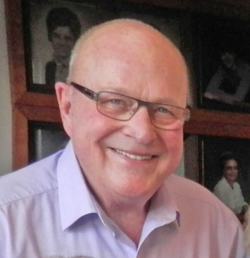 William ‘Bill’ Lester Baker, 76, passed away on Dec. 29, 2016 Bill was on Born May 10, 1940 in Fort Scott, KS to Lester E. Baker and Katherine (Salmon) Baker.
He grew up in Reserve, KS on a farm with his parents and older sister, Mary Jane. He graduated high school in Reservewhere he was a Varsity letterman in basketball, football and track and field.  After high school Bill decided he wanted to be a teacher so in 1956 he attended Peru State Teachers College in Peru. It was at that time he also joined the National Guard.  Unfortunately, due to financial restrictions Bill was unable to complete college. He did continue in the National Guard until he was honorably discharged in 1959.
For the next year Bill traveled and worked odd jobs until, in 1960 when he decided to join the Navy. This was the beginning of the Vietnam War and he was proud to do his duty. He served his country for four years as a member of the UDT (under water Demolition team) and was honorably discharged in 1964. After he was discharged, he moved back to KS and worked as a car salesman for Sherm Edde motors. This is how he met the love of his life Betty Jean Huettner. One day, after he sold a car, he brought in a title to be registered and Betty was sitting behind the desk.  He got one look at her and knew she was the one.  That was in Sept., and three months later in Dec. they said “I do”.  On Dec. 5, 2015 they celebrated their 50th wedding anniversary with friends and family at the Moose Lodge in Ellensburg.
After they were married, Bill and Betty moved to Omaha where Bill worked as a meat inspector. They lived in Omaha for two years until he was transferred to Seattle. They settled in West Seattle and had two children, Anjanette “Anji” Bryant and Marc Baker. Bill served as union as president for a term and took this job very seriously.  He fought fair wages, and good benefits. His last and final transfer was here in Ellensburg where they settled in and made their home and life.
Bill retired from meat inspection in the early 1980’s for a few years took up part ownership of the Frontier tavern. In the Mid 1980’s he started working for the Ellensburg school district. He drove a bus route and was a para professional in the special education department.  He loved kids and the kids loved him. He also started coaching his kid’s soccer and baseball teams. He spent almost every weekend at the fields, gyms and pizza parties. They made lifelong friends here in Ellensburg that turned into family.   Family that has always been there when needed.
Bill coached soccer for KVJSA for years and held the office of president for a short while. Coaching was something Bill was born to do.  He headed up the first girls’ soccer team at the Ellensburg high school in 1986 and two years later was asked to do the same at Central Washington University and head up the women’s soccer program. He was the head coach for the Central Women’s soccer team from 1989 to the mid 1990’s. He will always be known as “Coach” by so many that had the privilege of playing for him.  Bill retired from the school district in 1999. He then spent time fishing, some short traveling and working in his garage. He continued to make homemade sausage and passed the torch to his children this last fall. He sat back and let them run the show. Even though the last few years were hard for him to get around because chronic health issues, he and Betty were able to take one last family trip with the kids and grandkids to Disneyland the spring of 2016.
If you knew Bill, you knew what a great sense of humor he had.  Always with a big hug and smile.  And if you were lucky a little joke or “tall” tale as well. He will be so much missed and we are so lucky to have known and loved him.
He was preceded in death by his parents.
He is survived by his wife of 51 years Betty Jean (Huettner) Baker; daughter, Anjanette “Anji” (Dave) Bryant; son, Marc Baker; grandchildren, Katie and Maggie Bryant; sister, Mary Jane (Baker) Miner.
A memorial service will be 11 a.m. Saturday, Jan. 21, at First Lutheran Church. A potluck will follow at the Moose Lodge until 3 p.m.