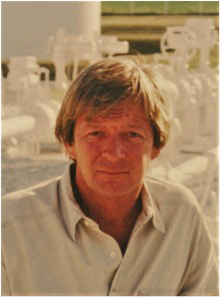 Duane Michael Simmonds, 71, of Murray, NE, passed away Dec. 1, 2016, in Murray. Duane was born in Falls City, on Oct., 3, 1945, to the late Clarence “Big Babe” Simmonds, and Mary Rosalie (Zvolanek) Simmonds of Rulo.
He was raised in Rulo, one of five children, where he went to school. He attended Reserve Rural High School in Reserve, KS his freshman year, and then transferred to Falls City Sacred Heart, and graduated May of 1963. His class size was 25.
After High School, he worked in road construction, for Ideker Construction, until he enlisted in the U.S. Navy, Feb 26, 1965. Duane served his country until he was honorable discharged, Feb. 25, 1969.  After his discharge, Duane returned to Rulo, and worked on the Missouri River dredging sand, and doing barge work with Cliff Liberty. February, 1973 he started working for Williams Pipeline as an Operator. After 30 years of Service, Duane retired in March of 2003. In his younger days, Duane enjoyed hunting and fishing with his family and friends. Later in life, he enjoyed spending time in Rulo with family and friends, and assisting his older brother Ed Simmonds maintain their Family home.
Duane was preceded in death by; his parents and brother Dennis.
He is survived by his brothers Edward Simmonds, Rulo, Terry (Debbie) Simmonds of Mound City, Mo. A sister Lisa Law, Falls City, and many nieces, and nephews.
The Family will be hosting a Celebration of Life Service, Saturday, Dec., 17, 2016 at the George Ogden Building in White Cloud Ks. 3345 Thrasher Rd, White Cloud, KS 66094. Family will receive friends from 10:00 to 11:00, then there will be a time for sharing favorite memories and stories from 11:00 – 12:00 followed by a lunch.
A private Family inurnment will be at a later date.