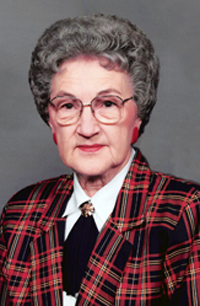 Julia was raised in Butler County on a farm. She married Leo Aerts on Nov. 23, 1943 at David City. He later passed away on Oct. 4, 2009. When married, the couple established their home on a farm near David City and he worked on the family farm. She then moved into David City in 1945 when her husband left for the war.

Throughout her life, Julia painted and finished numerous homes and offices. She retired in 1991 and moved to Falls City in April of 2011.

She enjoyed gardening, working on puzzles, and playing cards. She was a member of the Sts. Peter & Paul Catholic Church, the Altar Society, and Past President of the Parish Council of Catholic Women of David City.

She is preceded in death by her parents; husband; brothers, Paul, Alfred, Arnold, and Leo “Bud” Hilger Jr.; and son-in-law, James Heineman.

Dorr and Clark Funeral Home, of Falls City, is in charge of arrangements.