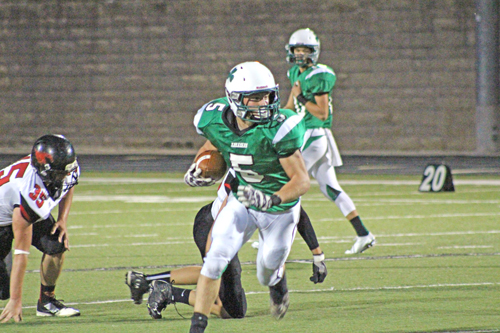 Photo and Story By Brian McKim
The Falls City Sacred Heart Irish continued their winning ways Friday night against the Mustangs from Meridian. The Irish took control early on and never looked back.   The 5-0 Irish came out of the gate quick and had the Mustangs reeling from the first play of the game.
On the very first offensive play of the game for Meridian, quarterback Baxter Beal floated a pass across the middle of the field that was picked off by Noah Keller of the Irish. S.H. had the ball on the Mustang 33 yard line to start their drive. On first down Austin Ahern carried it for 12 yards, then on second down Drew Bippes hit Keller down the right side of the field for a 21 yard touchdown pass. A run by Christian Harring for the conversion was good and with 11:16 to go in the first quarter the Irish led 8-0.
On the Mustangs next possession the Irish forced a three and out. Sean Arnold took the punt back 17 yards to the Meridian 39 yard line. On the very next play Harring took the handoff through the left side of the line for a 39 yard touchdown run. Another Harring carry up the middle made the score 16-0 with 8:54 still remaining in the first quarter.
The Irish defense was stingy again on Meridians next set of downs forcing another three and out. The Mustangs punt was fielded by Arnold who cut across the field and had wide open real estate all the way to the end zone. Officially it was a 48 yard punt return for the touchdown with 6:38 to go in quarter number one. A Bippes to Nathan Bird pass was good for the PAT and the score was 24-0.
The Mustangs failed to do much again the next time they had the ball.   On second down Theo Rhorer and Bird combined for a sack.  Then on fourth down the Mustangs tried a fake punt that was sniffed out by the Irish. SH took over on the 23 yard line. Three plays later Harring took the ball left and into the endzone for his second touchdown of the evening. The PAT kick by Emerson Keithley was no good but the Irish were in control 30-0 with 3:02 still left in the first quarter.
The Mustangs were still looking for their first first down of the game. However on fourth down the quarterback threw a ball that went through the receivers hands and turned the ball over on downs to the Irish. On the very next play Harring took the ball and made a couple of defenders miss and scampered into the end zone once again for a 33 yard touchdown. The extra point kick again missed and the Irish led 36-0 with 1:01 left in the first quarter.
To start the second quarter Meridian had the ball fourth and five from their own 20 yard line. Again they rolled the dice and went for it, and again the pass fell incomplete and SH had a short field one more time. Three plays later Harring again carried the ball into the end zone, this time from one yard out.  This time the kick by Keithley was good and the score went to 43-0 Irish.
After stopping the Mustangs again the Irish took over first and ten from their own 17 yard line.   Much like the rest of the night the Irish wasted no time as Harring squirted through the left side of the line for a 63 yard touchdown run.  According to Coach Doug Goltz it was Harring’s fifth carry of the game and he had five touchdown runs.
“You can’t get any more efficient than that,” said Goltz.
The kick by Keithely was good and the score went to 50-0 with with 6:21 to go in the half.
After another three and out the Irish again forced a punt. A nice punt return by Joe Bieker was negated by a block in the back penalty. The Irish would start this drive on their own 35 yard line. The Irish starters were done for the night as the JV offense took the field. SH moved the ball but failed to score as time ran out in the half with the Irish leading 50-0.
With the clock running in the third quarter the Irish turned the ball over when Freshman Jake Hoy fumbled the ball and Meridian recovered on the Irish 32 yard line.   Seven plays later quarterback Baxter Beals took the ball for a three yard score. The conversion attempt failed and with 6:58 to go in the third quarter the Irish led 50-6.
Sometimes in football you have to have a short memory and that’s just what Jake Hoy had in mind.   On the Irish next set of downs he took the ball 55 yards for a touchdown and the second play of the drive. A pass from Hoy to Max Froeschl made the score 58-6 with the Irish in  full control.
The two teams traded possessions until the clock expired with Sacred Heart winning 58-6.
Harring led the ground attack for the Irish with 143 yards and five touchdowns on just five carries. Jake Hoy added another 101 yards and a touchdown on six carries. Bippes only threw four pass but completed them all for 59 yards. On defense Tanner Cromer, Branson Darveau and William Morehead led the way for the Irish.
The Irish will travel to Shickely to take on the 5-0 BDS Eagles.   This should be a great contest between two D-2 powerhouses. According to Coach Goltz the defense will need to be good on the edge.
“They are very good at running to the outside,” said Goltz.  “They run multiple formations with many shifts and motions. They try to confuse the defense by making all their personnel eligible depending on the formation.”
According to Coach Goltz the Irish will need to keep quarterback Kale Kleinschmidt at bay.
“He may be the best football player in our class,” said Goltz.