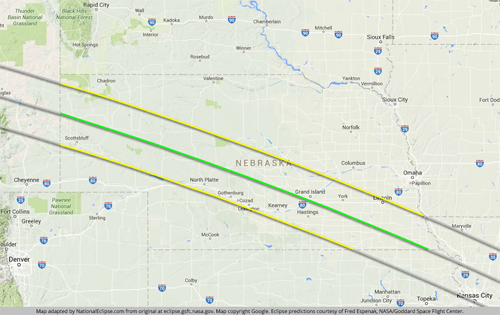 Falls City and Richardson County will be the place to be on August 21, 2017. A total solar eclipse will take place that day and no other state can boast of a longer path of totality than Nebraska.
A solar eclipse occurs when the Moon passes between Earth and the Sun, thereby totally or partly obscuring the image of the Sun for a viewer on Earth. A total solar eclipse occurs when the Moon’s apparent diameter is larger than the Sun’s, blocking all direct sunlight, turning day into darkness.
“Falls City is located only about four miles from the centerline of the eclipse path, where totality lasts the longest. As a result, Falls City will get about 2 minutes and 37 seconds of totality, just three seconds short of the eclipse maximum. People from all over the world will travel to the path of totality to see the eclipse and any town or city close to the centerline, like Falls City, will likely see a large influx of visitors in the days leading up to the event,” said Dave Clark at nationaleclipse.com
The National eclipse will move across a narrow path from west to east across 14 U.S. states. To fully experience the exlipse, you must be located within the path of totality, with the duration of totality lasting the longest at the center line. For several tourists, Falls City is the place to be for this event. A local motel has even reported having rooms booked for the event over a year ago.
The centerline of the National exlipse enters Nebraska near the town of Henry at 10:25 a.m. MT, with totality beginning at 11:46 a.m. MT. With 467 miles of shadow coverage, Nebraska’s share of the path represents about 19 percent of the entire coast-to-coast mileage. And, indeed, no other state seems to include such a wide scattering of cities and towns already planning

to celebrate. From Alliance and Tryon to Stapleton and Kearney to Grand Island and Beatrice, Nebraskans are setting up viewing sites and planning eclipse-related events.
In western Nebraska, the path of totality crosses the town of Alliance, which will provide viewing areas in several locations, including at the local “Carhenge” attraction (think Stonehenge, but with vehicles). Farther east, the eclipse crosses over North Platte, with totality lasting for about one minute and 45 seconds. Not bad, but not as good as what can be had in the towns of Tryon and Stapleton to the north, so North Platte is calling itself the “basecamp” for eclipse viewing in the Nebraska Sandhills and is making plans to bus people to festivals in Stapleton and Tryon.
The centerline skirts the southern fringes of Grand Island, where totality will last for about a whopping two minutes and 34 seconds, just seven seconds less than the eclipse maximum. Nebraska’s capital city, Lincoln, gets an invitation to the eclipse party, but the city is located along the northern limit of the eclipse path, with totality lasting for about a modest one minute and 14 seconds. And while Omaha, Nebraska’s largest city, isn’t located within the path of totality, it’s only about 37 miles away as the crow flies and will serve nicely as a source of overflow lodging.
The centerline of the National eclipse exits the state near Falls City at 2:32 p.m., with totality coming to an end at 1:07 p.m. From the Wyoming-Nebraska border to the Nebraska-Kansas border, the Moon’s shadow travels approximately 467 miles along the centerline in about 18 minutes at an average speed of 1,556 miles per hour.
The centerline of the eclipse enters Missouri as it crosses the Missouri River into the city of St. Joseph at 11:40 a.m., with totality beginning at 1:06 p.m.  In fact, only one other time along the length of its track does the centerline enter a state within the actual limits of a city or town, and the denizens of St. Joseph are getting ready to welcome the eclipse with open arms. At about two minutes and 38 seconds, the duration of totality here will be just three seconds short of the eclipse maximum.
This total solar eclipse will be the first total eclipse since 1991, though the path of totality crossed over Hawaii. The August 21, 2017 eclipse sweeps across the United States from Oregon to South Carolina, allowing almost every person in the 48 states to reach totality within a day’s drive.
For more information on next year’s eclipse, go to www.nationaleclipse.com.