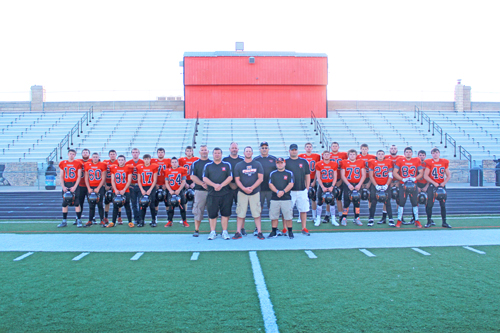 By Brian McKim
The Falls City Tigers kicked off their 2016 campaign on the road against the Southern Raiders in Wymore on Friday, Aug. 26.
The Tigers scored first and never trailed in the game. They capped off a 10 play, 64-yard drive with a two yard touchdown run by Edward Fritz. The PAT failed but with 2:45 remaining in the first quarter, the Tigers had a 6-0 lead.
It didn’t take long for the Tigers to get on the board again.   This time it was an eight play, 64-yard drive, culminated by a 12-yard run by Zane Heckenlively for the touchdown. This time the PAT run by Rudy Vrtiska was good and with 10:09 left in the first half the Tigers had staked a 14-0 lead. This is where the score would remain as the first half came to a close.
The third quarter began with Southern taking the kickoff out to their own 30 yard line, but three plays, and minus seven yards later, the Falls City defense forced a punt. The Tigers didn’t fair much better on their next drive as they totaled just five yards on three plays, and also had to punt the ball away.
The two teams traded possessions before the Tigers offense put together a seven play, 51-yard drive that ended with Heckenlively once again scoring, this time from two yards out.  The PAT was no good as a Vrtiska to Trevis Keller pass fell incomplete. The Tigers now led by a score of 20-0.
On their next possession Southern marched down the field in six plays for its first touchdown of the game.
Quarterback Drake Adams hit Trevin Saathoff  for a 51-yard touchdown pass just over the head of a Tiger defender. The extra point kick was no good, and with 1:13 left in the third quarter, Falls City continued to lead, 20-6.
The two teams traded possessions once again in the fourth quarter. Falls City turning the ball over on downs, then forcing the Raiders into a three and out.  After a Wymore punt, Falls City took the ball over on the opponents 33 yard line. On the following play Edward Fritz broke free for a 33-yard touchdown run.  Fritz also tacked on the two-point conversion and the Tiger lead went to 28-6.
Scoring for the Tigers came to an end when Heckenlively carried the ball into the end zone from 18 yards out. The kick by Dalton Kennel was good and the final score went to 35-12.
Heckenlively was the workhorse for the Tigers as he sprinted for 232-yards on 22 carries.  Vrtiska and Fritz put up 91 and 72-yards respectively.
On the other side of the ball the Tigers were led by Fritz with eight total tackles including 2.5 sacks.
The Tigers didn’t play perfect though as they did commit 13 penalties for 92 yards. When asked about it Coach Fritz said, “We had some guys playing new positions, I think nerves were working on them more then normal.”  Fritz gave credit to Heckenlively on both sides of the ball.  He also singled out the defensive line play of both Ben Bauman and Dalton Kennel.
The Tigers will be at home Friday night as they play host to Ashland-Greenwood with hopes of avenging last years 41-14 loss.
“Ashland will be more than a handful, they are a very gifted team that will be looking to get in the win column this week.  We need to have a good week of practice,” said Coach Fritz.