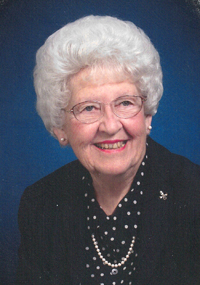 Esther L. Mueller, 100, of Hiawatha, KS, passed away surrounded by family on Saturday, Aug. 27, 2016, at Vintage Park Assisted Living Apartments in Hiawatha.
Esther was born at the family home near Reserve on Dec. 21, 1915, the daughter of Ralph Sr. and Jennie Frye Hillyer, and had lived in Brown County her entire life.  She grew up near Reserve and attended Hart District #33 county school, prior to graduating valedictorian at Reserve High School in the class of 1935.  Esther then enrolled in nurses training at Missouri Methodist Hospital in St. Joseph, MO, for nine months.
Mrs. Mueller was a longtime member of Reserve United Methodist Church before transferring her membership to First United Methodist Church in Hiawatha.  Esther was kept very busy being a farm wife and mother; along with being pianist for Church, school and community events.  She loved playing the piano by ear or by note.  If that wasn’t enough, she was a member of the LaGrange Club; Alta Vista Club, and WSCS, which is now UMW (United Methodist Women) of the Church. Esther was a Gray Lady volunteer for many years at Hiawatha Community Hospital
She married Edward H. Mueller on March 6, 1938.  They farmed and raised livestock north of Hiawatha for many years, until they retired and moved to Hiawatha in 1994.  He died May 22, 1997.  She was also preceded in death by her parents, her step-mother, Marie Hillyer, and a brother, Ralph Hillyer Jr.
Survivors include two sons, Marvin (MaryAnn) Mueller and Jim (Christie) Mueller, both of rural Hiawatha, a step-sister, Doris (Clarence) Yoesel of rural Falls City, NE, four grandchildren and nine great-grandchildren.
A Celebration of Esther’s life is planned for 10:30 a.m. Thursday, Sept. 1, at the First United Methodist Church in Hiawatha, with Pastor Jacob Cloud officiating, assisted by Shane Spangler.  Interment will follow at Hiawatha Cemetery.
Friends may call at Chapel Oaks Funeral Home after 9 a.m. Wednesday, where the family will meet that evening from 6 to 7:30.
Memorial contributions are suggested to First United Methodist Church, Hiawatha Community Hospital or the Brown County Ag Museum.  They may be sent in care of the funeral home, 124 S 7th St., 66434.  A special message or remembrance may be sent to the family at www.chapeloaksfuneralhome.com.