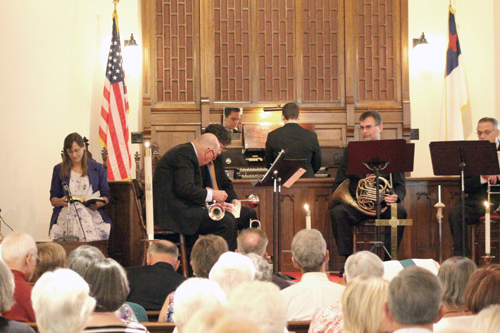 By Jennifer James
Psalm 100 tells us to “Make a joyful noise to the Lord,” and surely that happened Sunday, June 26, as the First United Presbyterian Church, 20th and Harlan, celebrated the 150th anniversary of the church’s founding.  Approximately 190 people lifted their voices together as they sang hymns dear to the members of our church family.
The service began with an organ duet by Michele Gaskell, organist for the NEB-KAN parish (Falls City, and Hiawatha, Presbyterian churches) and David von Behren, senior at Cleveland Institute of Music. von Behren served as organist for the Falls City church for six years. Rev. Carolynn Winters-Hazelton, interim pastor, welcomed everyone and introduced Rev. Roxie Sullivan, Tulsa, OK, former pastor of the Presbyterian parish, and Mrs. Jeanne Giles, Lincoln, wife of former pastor Rev. Robert Giles. Rev. Winters-Hazelton also described how church family members offered favorite hymn names and reasons for their choices. David von Behren introduced the program and set the tone for the day. He described how several people asked about the date of the concert.  He replied that the occasion was a Hymn Sing, not a concert. Then he realized it truly was a concert, and everyone present was an important performer in the concert. “This concert could not happen without the wonderful voices of each and every person here today.”
The initial song was the church’s anniversary hymn, “God of the Ages, Whose Almighty Hand” suggested by Dick James, who noted “This was sung at our wedding.” and Michele Gaskell who said, “This majestic hymn celebrates God’s protection and love of us as He leads us through our paths of life.” The Palladium Brass, a quintet from Omaha, provided a joyous accompaniment for this hymn and several others. Other hymns were “Jesus Christ is Risen Today,” “Blessed Assurance, Jesus is Mine,” and “What a Friend We have in Jesus,” with the last hymn added by von Behren. He told everyone that as he organized the program, he couldn’t resist putting his favorite hymn in the list.
“How Great Thou Art,” “Here I Am, Lord,” “Our God, Our Help in Ages Past, “Hymn of Promise,” and “The Church’s One Foundation” were sung with love, before von Behren asked if any voices were tired.  The congregation rested for a few minutes, while Ron Cima, husband of Gay Gibson Cima (FCHS Class of 1966) and member of the Choral Arts Society of Washington, D.C., wowed everyone with “America the Beautiful” suggested by Sharan Kerl as she wrote, “I can feel the grandeur R. L. Bates must have felt when atop Pike’s Peak.”  During the song, ushers collected mystery hymn suggestions from people. “Eternal Father, Strong to Save,” “A Mighty Fortress is Our God,” “Great is Thy Faithfulness,” “Blest Be the Tie that Binds,” “Come Thou Fount of Every Blessing,” and “I Danced in the Morning,” filled the sanctuary with beautiful music. von Behren then drew from the mystery hymn suggestions. “Be Thou my Vision” was the choice of Amalia Hansen, Omaha, granddaughter of former church member John Morehead and Amy Morehead. The last song was the cherished hymn, “Amazing Grace” and the congregation was challenged to sing a verse a cappella.  Rev. Winters-Hazelton offered a blessing at the conclusion of the Hymn Sing and thanked everyone for celebrating with the church family.  The postlude was “Variations on Old One Hundredth” performed by the Palladium Brass.  von Behren closed the occasion with one of his most popular pieces, “Toccata from Symphony V” by Charles-Marie Widor.
The congregation was invited to Westminster Hall for a reception after the service and a free will offering was collected.  Half of the proceeds will go to the Little Stars Program, taught by Glenda von Behren and David von Behren.  They introduce young children to the magic of music.  The other half of the offering will go to the Richardson County SENCA food pantry.