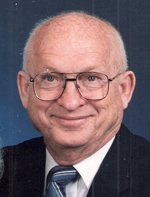 Jerry K. Mullins, 80 of Ames, IA, passed away on the morning of Wednesday, June 8, 2016 at the Willow Dale Wellness Center in Battle Creek, IA. He was born on Aug. 24, 1935, in Stella, he was the son of Clyde and Opal (McDougal) Mullins.
Jerry graduated in 1954 from Salem, and then attended Peru State College, graduating in 1957. In the beginning of his educational studies, he married the love of his life, Evelyn Reschke, on Aug. 7, 1955, in Falls City. They had shared 60 blessed years of marriage at the time of his death.
Furthering his education, he received his Master’s degree from the University of Nebraska, thus beginning a colorful career in education. He began in Cook, NE and then David City, Valparaiso, Raymond Central, Garwin, IA, Dow City/Dunlap, Falls City, and retired in 1993 to Rogers, AK.
The couple moved back to Ames, Iowa in 2001 to be closer to family. Mr. Mullins was a member of the Comet Lodge AF & AM in Ceresco, NE. – serving as Master Mason, the Scottish Rite of Full Masonry, The Shrine Lodge of Lincoln, and Memorial Lutheran Church in Ames. He enjoyed fishing, high school athletics and time with his family.
He is survuved by his loving wife Evelyn, his children, Mark (Robin) Mullins of Malvern, IA; Steve (Laura) Mullins of Beatrice; Todd (Melinda) Mullins of Garwin and Brian (Melissa) Mullins of Battle Creek; as well as 11 grandchildren, 13 great-grandchildren; sisters, Phyllis Davis of Atlantic Beach, FL.; Katie Kanatzer of Kingman, AZ and Dixie Trusty also of Kingman, AZ, as well as many nieces and nephews.
He was proceeded in death by  parents; siblings, Bob, Bill and Don Mullins and Naomi Weibel.
Funeral services will be held at 1:30 p.m. on Saturday, June 11, 2016, at the Mitchell Family Funeral Home in Marshalltown, Iowa. Visitation will be from 5:00 to 7:00 p.m. on Friday, June 10, 2016, at the Mitchell Family Funeral Home in Marshalltown, IA. Memorials may be directed to the family to be designated at a later date in a fitting tribute for Jerry.