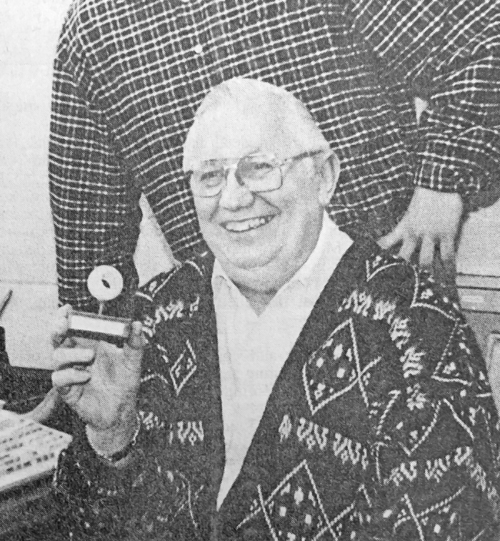 Long-time Falls City Journal Sports and City Editor Delmar “Del” Paul Sutherland, 86, of St. Joseph, MO, formerly of Falls City, passed away Saturday, April 30, 2016 at Mosaic Life Care in St. Joseph. He was born Jan. 22, 1930, in Elm Creek, NE, the eighth child of Emma and James Sutherland.
Del worked at The Journal for 31 years, retiring in 1995. The newspaper was published daily, including Saturdays, for most of that period. He succeeded Claire Hurlbert in 1964 and eventually became the unofficial sports historian for the county. He covered nearly 3,000 basketball games alone during his career. Del was a past president of the Nebraska Sportswriters and Sportscasters Association.
According to his family, it was “a job he dearly loved. He liked the people he worked for and the people he worked with. He often said he never regretted going to work. He met people from all over Nebraska, Kansas and Missouri.”
Del retired to his St. Joseph home and, often regardless of the weather, spent his time on the golf course. His meticulous record-keeping ability also served well as president of the St. Joseph Historical Society (Robidoux Row).
Growing up, Del was the eldest of “three little kids,” as they were referred to by the family. When he was 50, his mother said, “My land. You three little kids are middle aged!” His parents and eight siblings preceded him in death. A sister, Neva Brindle, of Hagerstown, MD, survives.
He married Joyce Metzgar 60 years ago at the Congregational Church in David City. Mrs. Sutherland, a retired Falls City schoolteacher, also survives, as do their children, Paula (Bob), Quinten (Julie), Leah, and Sherman (Rae); and grandchildren, Alicia, Carla, Stephanie, Eric, Jonah, Tara and Veda; as well as a wealth of friends and relatives.
He graduated from Overton (NE) High School and the University of Nebraska at Kearney. He was a veteran of the Korean War.
Del was a member of Francis Street First United Methodist Church in St. Joseph, member and Past Exalted Ruler of Falls City Elks Lodge No. 963, past district deputy of the Grand Exalted Ruler, past president of the Falls City Lions Club and served on the City Council in Falls City. He was also an elector for the Heisman Trophy.
He also was past president of High Twelve, and belonged to Falls City Masonic Lodge and Eastern Star. He belonged to the High De Paynes Commandery, York Rite, Moila shrine and the Red Cross of Constatine.
He liked to play golf and try out different golf courses. He was an avid reader and book collector. Del read about everything, but he especially liked Louis L’amour books, and he was proud to be the owner of every book written by Zane Grey. He especially enjoyed a visit to the Zane Grey Museum in Zanesville, OH, a few years ago.
Del liked gathering with friends, playing cards, family reunions, hosting Halloween parties, yellow roses and worthy causes. Years ago, he donated his body to the Nebraska Anatomical Board for study and research. Among his favorite worthy causes were Robidoux Row, Salvation Army, Child Saving Institute of Omaha, and Francis Street First United Methodist Church.
Farewell Services will be held at 3 p.m. Thursday, May 5, at Francis Street United Methodist Church (12th & Francis Sts.), in St. Joseph. The family will gather with friends following the service at their home.
Meierhoffer Funeral Home & Crematory is in charge of arrangements.
www.meierhoffer.com