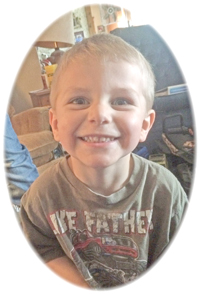 “Bugs,” as he was so affectionately called, had a smile that lifted the room and bright blue eyes. He loved the movie “Frozen,” which was watched daily. He also had a love for “Minions.” He spent countless hours playing with his tractors, which he called “cows.”

Bugs was an active boy and full of energy; he thought everyone was his friend. He was a joy to all and had kisses and hugs for everyone. Although he is now in Heaven he will forever be in our hearts.

He is survived by his mother, Cheyenne Brown, of rural Auburn; grandmother, Wendy Lea Presley, of rural Auburn; grandfather and step-grandmother, Larry Wayne Brown and Laurie Young, both of Salem; uncles, Marshall Usher, of Auburn, and Allen Cress, of Scottsbluff; aunt, Ashley Vaughan, of Texas; grandfather, John James, of Bennett; great-grandparents; and other relatives.

He was preceded in death by his father, Justin; grandfather, Kurt Eugene Presley; and his great-grandfather, Mark Neal Myers Sr.

Funeral services were held Saturday, April 9, 2016 at the Hall Funeral Chapel in Auburn, with Allan Thomas officiating. Burial followed at the Spring Creek Cemetery near Tecumseh. Visitation was Friday at the funeral home.
In lieu of flowers memorials may be given in Wayne’s honor to the family.