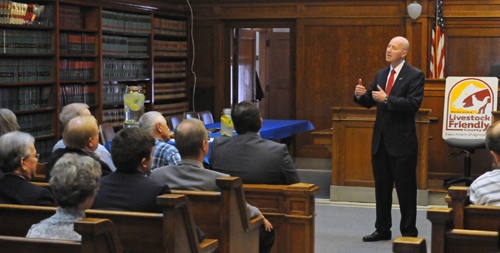 Governor Pete Ricketts Monday in the District Courtroom on the third floor of the Courthouse in Falls City announced Richardson County as the newest county in the state to become designated a Livestock Friendly County.
The announcement was made as part of a series of activities in celebration of National Ag Week.
“By taking this step to be designated a Livestock Friendly County, Richardson County is letting the agribusiness community know that they are open for business,” Ricketts said. “This area has abundant natural resources and a deep history in agriculture. The responsible growth of livestock operations in this area will support the future of their family farms and local economy.”
The Governor was joined by several ag leaders for the event, including NE Ag Director Greg Ibach, State Senator Jerry Johnson, NE Cattlemen President Barb Cooksley and NE Farm Bureau President Steve Nelson, all of whom were flying all over the state with the governor.  A number of Richardson County dignitaries, including Commissioner Dave Sickel, also spoke at the event.
“The responsible growth of livestock operations adds value to area corn and soybean farms through increasing feed grain demand,” said NDA Director Greg Ibach at the designation ceremony. “Richardson County joins a growing list of counties that are promoting livestock production as a key to rural economic development.”
Created in 2003 by the state legislature, the LFC program is designed to recognize counties in the state that support the expansion of the livestock industry. In 2014, livestock receipts in the state comprised over half of the $24 billion of Nebraska’s total on-farm receipts.
There are now 36 counties designated as Livestock Friendly through the state program.