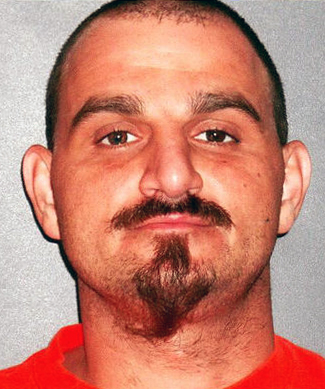 Desiderio C. “Desi” Hernandez, 34, of Falls City, appeared in Richardson County Court Friday, charged with attempted first degree murder in the alleged Aug. 4 shooting of his cousin, 31-year-old Joseph Debella Jr. Hernandez is in custody, held on a $1.5 million bond and a preliminary hearing is scheduled for Aug. 24.
Authorities believe Hernandez fired the gunshot that struck Debella in the head late last Tuesday night, Aug. 4. Police found Debella on the basement floor of a home at 1418 Morton St. in Falls City (directly east of FC Middle School) and he was eventually flown to Lincoln’s Bryan Trauma Center West. The Kansas City, KS, man remained in critical condition as of Monday night (Aug. 10).
Police launched a regional manhunt for Hernandez in the early morning hours of Wednesday, Aug. 5, and by that evening had traced him to a residence in Horton, KS. People there were alerted between 8:30 and 9 p.m. via a group emergency text message, the convicted felon refused to exit the house, and a more than five-hour standoff ensued. The ordeal came to a loud but mostly peaceful end at 2:15 a.m. Thursday, Aug. 6, when tear gas and flash bombs prompted the suspect to surrender.
Hernandez walked with a noticeable limp when being led from the scene and a family member told The Journal Hernandez needed stitches to close a minor wound. He was taken to Brown County (KS) Jail and then transported to Falls City for Friday’s court appearance.
Hernandez and Debella, according to another cousin, Benita Howard, of Ottawa, KS, grew up together in Wolcott, KS, and were “very close.” Hernandez has lived in Falls City for several years, but Debella had only been here visiting for about a month, according to Mrs. Howard.
Howard, on behalf of the Hispanic family, urged area citizens to avoid a rush to judgment and asked that people refrain from posting hateful, racist remarks on social media outlets.
“We don’t know what happened,” Howard said. “We are praying it was an accident, and praying Joey pulls through.”
Initial reports of the shooting occurring after midnight Wednesday, Aug. 5, were contradicted by yet another extended family member, who wished to be unnamed. The Journal’s source said the 9-1-1 call came before midnight. The person knew this, they asserted, because they were the ones who actually made the call.
Since then, two men, allegedly in the home at the time of the shooting — 29-year-old John Hall, of Shubert, and Brett Winters, of Falls City, who had his 19th birthday Friday — have been arrested in connection with the case, accused of tampering with evidence. Authorities say Hall was on the ground floor when he heard the shot go off, and then removed drug-related items, including a scale, from the scene.
This is not Hernandez’ first rodeo: He’s been charged with attempted murder before. In early July 2013, authorities said Hernandez cut the throat of Damon Gates with a razor knife during at altercation at a residence in Falls City. Months later, after accepting a plea bargain from Richardson County prosecutors, he was sentenced to three years of intensive supervised probation on a felony charge of assault in the second degree. Said probation will most likely be revoked.
In June 2014, after successfully completing work ethic camp in McCook, and not yet a full year after sneaking up on a man and cutting his throat, Hernandez walked free. Days served in the Nebraska Dept. of Corrections: Zero.