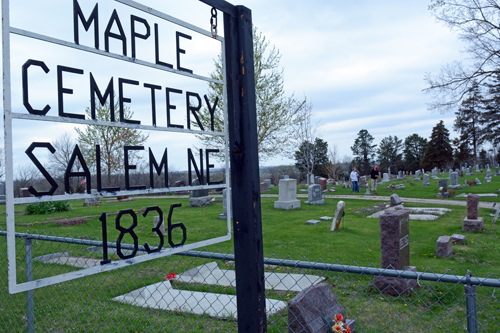 Memorial Day programs will be held in Rulo, Falls City Stella and Humboldt on Monday, May 25.

The Memorial Day service at the Rulo Cemetery will begin at 9:30 a..m. with Air Force veteran Ken Simpson as the speaker.

The program at Steele Cemetery will start at 11 a.m. The speaker will be Ray Vinsonhaler, Navy veteran. Larry Whalen, commander of the Falls City Ceremonial Honor Guard, has coordinated both services.

The Humboldt service is scheduled for 11 a.m. under the direction of the Harvey Mann American Legion Post.

A 10:30 a.m. service is scheduled at the Stella Cemetery.

No special services have been planned, but folks are still urged to visit the recently renovated Maple Cemetery in Salem this Memorial Day.

Last summer, the Board of Maple Cemetery sought to make improvements after the loss of many trees to wind storms and a tornado. Old stumps needed to be removed and new trees planted. Board members also felt the cemetery had need for other improvements, such as a lawn mower, new outdoor toilet and repair to the road. There were neither village funds nor any other local government assistance available for improvements so the cemetery was depended upon contributions.

A plan for fundraising was started when the cemetery board received two $5000 anonymous donations. The $10,000 donation was contingent upon the donation being matched by other contributions. Letters seeking financial support for cemetery improvements were sent to friends and families of persons buried in the cemetery. Letters were also sent to persons who previously had given financial support to the cemetery as well as alumni of Salem High School. The Falls City Journal assisted with publicity. Contributions were to be sent to the Richardson Foundation in Falls City. The early responses were very gratifying to the members of the Cemetery Board. The anonymous donations were quickly matched.

The Cemetery Board became aware that a grant to plant trees may be available from the Nebraska Forest Service of the College of Agriculture at UNL. The Salem Village Board had to be the applicant for the grant. The Village Board unanimously approved the grant application in the amount of $10,000, which was estimated to purchase 50 trees, six to eight feet in height. The grant application was endorsed by the Richardson County Historical Society and the NNRD. The staff of the Nebraska Forest Service asked to develop a long-range plan for 75 trees to be planted in the cemetery.

Bids were received from three bidders. The low bidder to purchase and plant the trees was Grimm’s Tree Service of Hiawatha. The cost to purchase 50 trees did not consume all the money in the grant so the number of trees was increased to 79 trees. Money from the financial campaign paid for the planting of the trees. Volunteers assumed the responsibility of watering the newly planted trees. It appears the new trees survived the winter very well.