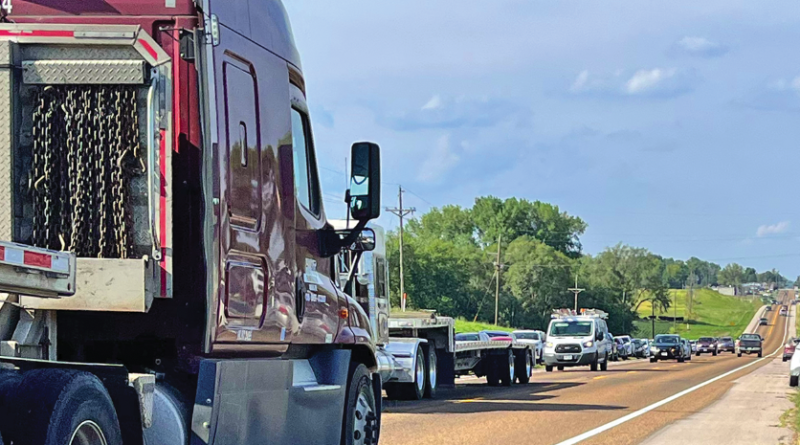 Nebraska State Senators reconvened Tuesday, January 17, in Lincoln. Senator Julie Slama introduced several bills into this year’s session. Her Legislative Bill 212 relates to roads. LB212 would require the Department of Transportation to plan, design, and purchase rights-of-way for U.S. Highway 75, asking it to be expanded to four lanes down through to the Kansas border and to pave all unpaved state highways; and to declare legislative intent to appropriate funds.

A representative for the Senators office said Senator Slama is really excited about this bill and “it is sad to hear about how many accidents and lives are taken on that stretch of road.”

Senator Slama had this to say in her latest column about LB212.

With over 800 bills introduced, the various committees will be hard at work going through the numerous bills. This column will highlight one of my bills this session that will have a direct, positive impact on District 1 – LB 212. LB 212 allocates funds to the Department of Transportation to construct a continuous four-lane divided highway system from Plattsmouth to the Kansas border. Additionally, LB 212, paves all remaining unpaved state highways in Nebraska.

My office has received numerous requests for this change, paired with personal stories of tragedy and injuries on Highway 75. This change is long, long overdue. There are only three sections of unpaved state highways in Nebraska; 18.85 miles in Frontier County, 10.04 miles in Pawnee County, and 10.28 miles in Otoe County. In total, there are 39.17 miles of unpaved highways in the state of Nebraska, with 20.32 miles being in District 1. Paving these unpaved highways is also long, long overdue. U.S. Highway 75 is the highway system that runs for 1,239 miles from Dallas, Texas to Kittson County, Minnesota – ending just short of the Canada-United States border. Within the state of Nebraska, it enters on the Kansas state border, 9 miles south of Dawson, traveling north across the extreme eastern portion of the state, to the Nebraska-Iowa border in South Sioux City, crossing the Missouri river along a concurrency with Interstate 129.

Currently, Highway 75 is four lanes south of Omaha until it reaches the southern edge of Plattsmouth. From the southern edge of Plattsmouth through Nebraska City, Auburn, and down to the Kansas border, Highway 75 is mainly two lanes. LB 212 seeks to expand that stretch of highway 75 to 4 lanes. Highways play a vital role in our daily lives, and the benefits they bring to our state and its residents cannot be overstated. From 2016-2020, US-75 from Plattsmouth to Nebraska City had 10 fatalities, 114 injuries, and 222 crashes and from 2016-2020, US-75 from Nebraska City to the Kansas Border had 12 fatalities, 144 injuries, and 326 crashes. The safety of Nebraskans is an everlasting high priority of mine and those driving on Highway 75 should feel safe during their travels.

It is time for the state to prioritize the roads in rural Nebraska. The quality of roads in rural Southeast Nebraska deserves as much attention as the roads running through cities such as Lincoln or Omaha. As always, I welcome your input on issues important to you. Follow along on my Facebook and Twitter pages, both entitled “Senator Julie Slama” for more updates, or contact me directly at Senator Julie Slama, District 1 State Capitol, PO Box 94604, Lincoln NE 68509-4604; telephone: 402-471-2733; email: jslama@leg.ne.gov.

Slama also introduced Legislative Bill 213. A bill relating to economic development; to amend sections 77-2902 and 77-2912, Reissue Revised Statutes of Nebraska, and section 81-1229, Revised Statutes Cumulative Supplement, 2022; to redefine a term and extend certain deadlines under the Nebraska Job Creation and Mainstreet Revitalization Act; to change a matching fund requirement under the Rural Workforce Housing Investment Act; to repeal the original sections; and to declare an emergency.

The Senator had this to say about LB213:

On January 4, the 108th Nebraska Legislature convened for its first regular session. This legislative session is in full swing, and we are nearly through the bill introduction period!

One of my bills introduced this session is LB 213, a significant economic development bill for District 1 and all of rural Nebraska. This bill targets villages and cities of the second class, which include any community or city under 5,000 residents. This bill makes two changes: lowers the match from .5:1 to .25:1 for Rural Workforce Housing and expands the Mainstreet Revitalization Act specifically for communities under 5,000 residents.

Rural Workforce Housing provides grants for the construction of workforce housing. Right now, RWHF grants require 50% of the RWHF award in matching funds, such as dollars contributed by individuals, businesses, political subdivisions, etc. into a single investment fund administered by the eligible nonprofit development organization. With this change, this match would be lowered to 25% for communities under 5,000 residents. With this bill, Nebraskans in smaller rural communities will be put on a more level playing field with the larger communities that are able to reach the percentage of matching funds easier.

Additionally, the Nebraska Job Creation and Mainstreet Revitalization Act, which without the passage of LB 213, this program would cease to exist this year. LB 213 would create a credit against Nebraska income tax for investment in the rehabilitation of historic buildings or buildings that contribute to a historic district. State historic tax credits have been shown to be effective at promoting both economic growth and historic preservation in small communities. Such credits are available in more than 30 states, most notably in the states bordering Nebraska.

Both parts of LB 213 were inspired by my summer tour of every community in District 1. Every village and town had at least a handful of highly-motivated people who wanted to grow and improve their hometown. I pointed them toward our current rural development programs, but these programs are built to serve larger cities in rural areas with a full-time economic development director and strong private investment. Our smallest towns most in need of these programs are constantly left out because they don’t have the private money for a match or they can’t take time off their full-time job for an application that is going to a larger town anyway. I’m working to fix this with LB 213.

As your State Senator, I am committed to crafting and supporting bills that help promote the economic development of rural communities in Southeast Nebraska. With this said, I am also working on crafting legislation that seeks to address rural clean water accessibility and cut more unfunded mandates. Stay tuned!