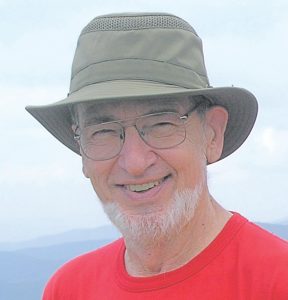 David Eugene Wetmore, a 37-year resident of Brevard NC, passed away Sunday, December 18th 2022 from secondary complications of Alzheimers—infections of the urinary tract and gall bladder.

He was born in Stella NE on 18 Dec 1935 to James and Hattie (nee Becker) Wetmore, and raised in Falls City NE, where his father served as an engineer for the Missouri-Pacific Railroad.

David enjoyed a typical midwestern 1940s childhood, trudging through Nebraska winters to deliver the Omaha World-Herald, riding his bike in the surrounding countryside, plinking at cans and blackbirds with the .22 rifle he received for his twelth Christmas, maintaining cars at the Standard Oil filling station and Electric Tire Shop.  An avid reader from an early age, he especially enjoyed working at the Lydia Bruun Woods Memorial Library.

Graduating from Falls City High School in 1954, he joined the Army National Guard and was accepted to Park College in Parkville MO.  In 1958 he earned a Bachelor’s Degree in Chemistry, leading to graduate studies at the University of Kansas in Lawrence.

On 01 Sep 1959 he married Ruth Nettleton of York NE, whom he’d met at Park and begun dating at KU.  Receiving his Masters Degree in 1960, they moved to College Station TX,  where he continued his schooling at Texas A&M University, and they began their family, welcoming sons Jim in 1960 and Dan in 1963.

After eight years in the National Guard, David was honorably discharged in the rank of Staff Sergeant.  In 1965 he was awarded his Ph.D., and the family headed to Morton PA, where he began work as a research chemist for Sun Oil Company.  While there he pursued his interest in target shooting, joining the Wilkes Barr Rifle Club, achieving Expert Marksman in rifle and pistol, and coached a college team at nearby Swarthmore.

In 1967, David accepted a teaching position with Saint Andrews Presbyterian College, prompting a move to Laurinburg NC.  There he taught Chemistry and Computer Science for 18 years, becoming a tenured Full Professor, and serving as Chairman of the Science Division.

During that time, he took up glassblowing, horseback riding, rock climbing and bicycling, covering the entire 469-mile Blue Ridge Parkway, and the 751-mile Mountains-to-the-Sea route across NC.  David became an avid hiker, and for several years co-taught a month-long Outward Bound-style winter camping course, and became an instructor in CPR and emergency first aid.

In 1985, tired of driving six hours each way for a good walk in the woods, he and Ruth transferred to Brevard College in western North Carolina, where he taught Computer Science for another 14 years, and pursued graduate studies in that field at Clemson University.

Retiring in 1999, David and Ruth travelled extensively throughout the lower 48, and he devoted much time to hiking in the Appalachian mountains he loved, completing all 900 miles of trails in the Great Smoky Mountains National Park, all 400 of the Pisgah National Forest, and climbing the 40 peaks over 6,000 feet in the southeastern U.S.  A long-standing member of the Carolina Mountain Club, he served as Secretary, a hike leader, and performed trail maintenance.

A memorial service will be held on Wednesday, 04 Jan at 10:30 AM at Brevard First United Methodist Church, 245 Broad Street in Brevard NC.  David’s ashes will be interred next to Ruth’s in the family plot in Stella NE.